You are here: Home › Reviews › SCI-FI/FANTASY FOR KIDS: The Secret World of Arrietty 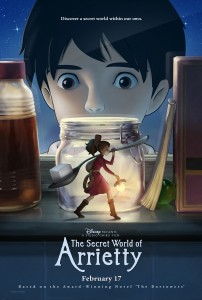 My kids and I are huge fans of Studio Ghibli. I love almost everything that I have seen from them, and my kids adore My Neighbor Totoro and Ponyo. Studio Ghibli is a Japanese animation studio. I would compare the studio to PIXAR, perhaps, and the primary force behind their output over the past decades is one man: animator Hayao Miyazaki. You may be familiar with some of their movies, like the “kid films” Ponyo and My Neighbor Totoro, or the older skewing fantasy movies Spirited Away and Princess Mononoke.

When Ponyo hit theaters a few years ago, I hoped to get the kids in to see it but we missed the chance, so we watched it together on video. Not long after, I heard rumblings about a movie based on the classic children’s book The Borrowers. For the last year or two, then, I have been waiting for The Borrower Arrietty (it’s original title — Disney changed the title for release here) to come to the States after its release in Japan. My intention: for my kids to see it on the big screen.

We finally got the chance. And it was worth the wait.

We ended up skipping Star Wars Episode I: The Phantom Menace in 3D in favor of Arrietty, and I am SO glad we did. (Mainly for “pocket-book” reasons. We own that movie and can watch it any time we want, and by “we” I mean my kids.) 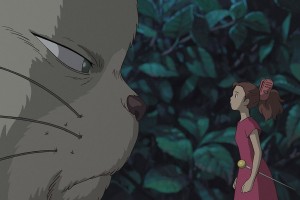 This interaction between Arrietty and the cat has a distinct My Niaghbor Totoro vibe. It has to be an intentional homage . . .

First, my kids’ reaction. All of them liked it almost as much as they liked My Neighbor Totoro and more than they liked Ponyo. This is no faint praise, because all four of them love both of those movies. They are some of the few movies to get repeat viewings in my house. My son loved the way the family of borrowers, six-inch-tall people who “steal” from the “human beans” the things they need to survive and who live under the floors and in the walls of human houses, had created a habitat using human objects. A straight pin becomes a sword. Double-sided tape is used to scale walls. Fish hooks are grappling hooks. As they wandered through a richly detailed world of these things, it really excited my ten-year-old son’s imagination. My daughters loved Arrietty, a strong young woman, and a far better roll model than Disney’s own princesses. This is typical for Studio Ghibli — strong, idealistic female lead character who react realistically in fantastic situations.

And I enjoyed the movie as well. Hayao Miyazaki is credited as writer for this, and did not direct as he usually does. I was a bit worried about this. The last Studio Ghibli film I saw without him as director was Tales from Earthsea, which I was disappointed in. The animation for Arrietty was close to flawless, though (there are a couple moments when the character interactions with the background felt a bit “off”) and the “secret world” the borrowers inhabited is richly detailed and sumptuous. Like all Ghibli films, the animation and story feel both sprawling and almost epic, but intimate in the details. 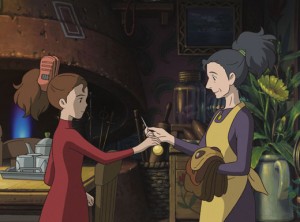 The story itself is simple, and it feels almost like it is more of a character study than anything. The action is low-key, and it is the characters who carry the story forward. The film really is more about the emotions of the moment.

At its heart, though, this is a movie about friendship and family. The familial relationship is quirky and positive, although when Arrietty makes a new friend in the “human bean” boy who moves into the house, the contact comes because Arrietty disobeys her parents. There are consequences to all of this, even if it is not addressed specifically.

The Secret World of Arrietty is a movie I highly recommend. I believe that it would not be to everyone’s taste, but if you appreciated the plot and tone of the earlier Studio Ghibli movies, you’ll feel the same about this. And if you’re not, this will be a good one to start with.

The Secret World of Arrietty is © Disney and Studio Ghibli