You are here: Home › Reviews › REVIEW: Green Lantern Is ABOUT Hollywood 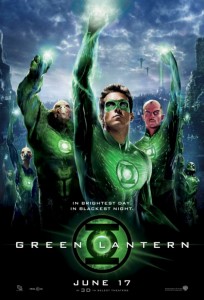 Green Lantern. For those who don’t know, it’s a superhero sci-fi fantasy action movie about Hal Jordan, who is given a ring (and a lantern, which charges the ring) that can create anything Hal can imagine using the power of green (also known as willpower) . . . which comes with a price: he is now a member of an intergalactic police force.

The premise has a lot of promise, and could easily be something really fun and interesting or truly awful. Amazingly, though, in spite of having the Hollywood power of green (also known as money) it’s none of the above.

Here’s my review: you know that kid that was always in your class who just coasted through school and never went beyond what they had to do in order to get by, even though they were talented and intelligent and maybe good looking? Who could have really contributed to society or been very successful if only they had applied themselves? But who slid through and never really did anything to live up to their true potential?

That’s Green Lantern. Not the character, the movie. End of review.

But thinking about it, I had some more thoughts I’ve been trying to sort through. Green Lantern embodies something beyond a simple “good” or “bad” statement of opinion. (Don’t get me wrong — the following is still opinion. I’m fully aware of that.)

The movie itself is half-hearted and goes through all the motions that superhero movies are supposed to go through . . . and tries to be both Superman the Movie and Iron Man (the first one), but does so without really knowing what made either of those movies work. On a purely technical level, it works, and on a conceptual level, it works, but all the in between stuff — you know, scripting and acting and filming and effects and editing — just doesn’t gel.

An outline of the basic storyline would look good on paper. “A” happens, then “B”, then “C”, which was caused by “A”, and “B” and “C” together make “D” happen. But four people wrote the movie, and it feels like it has four different tones and four different characterizations for the main cast.

This bothers me. It doesn’t bother me as much as the kid I was talking about above (who I sometimes WAS when I was in school and who I came across many, many times when I was teaching school . . . and still do, even out of that setting). Because that kid is a living human being with a future and with a family and who is a part of society. No, Green Lantern is a story. A $200 million story. And if you’ve read my blog at all, you know that I believe that stories have power. Sadly, the power this story had was wasted.

Here is a character who has the power to create whatever he can imagine, and when he does imagine things it just lacks . . . imagination. I know that something like this runs the risk of looking like a Looney Toons cartoon, and we already have a superhero movie like that in The Mask.

And, going to that other power of green, the one that the movie’s producers have, they could have done anything their imaginations dreamed up as well. But I just found myself being underwhelmed by it all. Once or twice, I thought the things he was doing were clever. The other times, it just felt bland.

That’s when it struck me: Green Lantern, in all it’s mediocre blandness, is a movie ABOUT ITSELF! And, in a bigger picture sense, about Hollywood blockbusters.

I have a long list of things that should have been done differently to make Green Lantern better, but what scares me is that there are a LOT of people who are MUCH smarter than I am who worked on this movie . . . and this is still the end result. 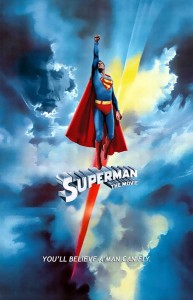 Superman, which has the heart of heroism and all ages appeal . . . 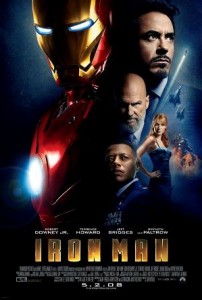 Iron Man, which is edgy and has a strong, sarcastic, and confident “hero” at its core who has a lot of life lessons to learn. 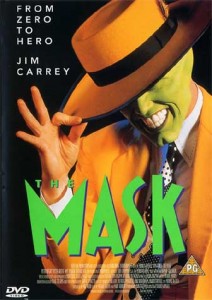 The Mask, which has a more wacky, abut also more organic, variation on the superhero who can make anything he can imagine come into being.

Each of these films have flaws . . . but they also have a lot of heart.