Well, is anyone surprised at the results from our poll?

Captain Picard won our poll, with over half of the votes! He’s the captain most of you would prefer as their commanding officer. So, okay Dr. Jayce, you’ve won this round…but not the war! Picard is an even handed leader who commands respect by how he carries himself, but also with proven results.

Dr. Jayce voted for Picard. i just know it. Savor your victory for now, Dr. Jayce.

Let's face it, this was only as funny as it was because he's so awesome.

Captain Kirk came in second, with a quarter of the vote. And lets face it, if you are going to go into battle, you want to go with someone who doesn’t believe in the “no win situation.” Unless you’re wearing a red shirt.

I’m surprised he didn’t have more votes, but this was for who you’d want to be your commanding officer. I’m not surprised Picard won that.

Although, this may be a surprise to some of you who know me: Kirk didn’t have MY vote. Not as far as the question goes: who do you want for your commanding officer. 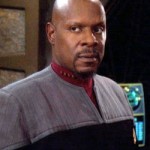 Realized a couple seasons in that bald captains are better, but took it up a notch with the goatee.

Captain Sisko came in next, with a full 1/8 of the vote! I’m a little surprised he didn’t do better. I mean, he DID have a commanding position during the whole Dominion War! And he was the prophesied messiah for a whole race of people! And his birth was manipulated by wormhole aliens from beyond time . . . Maybe I’m surprised he got as many votes as he did.

Deep Space Nine is a favorite series among many Trek fans, because it is darker and grittier. I wonder if that is why he didn’t get more votes. A lot of episodes in later seasons had to do with looking at casualty lists! 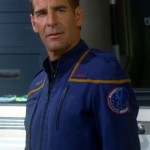 Captain Archer got two votes! And yes, technically, he was the first of the starship captains, truly going where no one had gone before.

I don’t have too much to add because I didn’t watch much of this series. He felt bland to me at first, although I’m sure he go much better.

Seems like the voters don’t have too much to add either . . .

Made admiral before Picard!!!

Finally, Captain Janeway got one vote. Mine. I’ll be the first to admit, her series Star Trek Voyager was not the best, and had some real problems (like the middle few seasons and the end of the series). But she took responsibility, was warm and witty, and she fought for her crew. Even if every plan to get them home failed miserably, she was going to the mat for you. And she inspired her crew to fight hard too! Even when they accidentally screwed up a plan to get home like Gilligan screwing up the professor’s bamboo inventions every week. Hm. On second thought, maybe I should change my vote.

No, Captain Kirk is my favorite captain. Captain Picard is an awesome guy with an impressive presence. Captain Sisko could be a little crazy, but got results. Captain Archer . . . was a captain. But if I had to choose my commanding officer, she’d be the one for me. (Even if I’m the one vote for her.)

And we don’t get paid to say this, but: all of these series are on Netflix in full. So you can watch Kirk get tribbles dumped on him . . . and then watch Sisko dump tribbles on Kirk . . . They are on some other online sites as well, like Amazon Prime and selected episodes on CBS.com.

What about you? What do you think of the results?

Dr. Jayce’s Dream crew
Our review of William Shatner’s documentary “The Captains”, which features “Captain Kirk” interviewing the other captains of the franchise (AND this poll!)
An audio documentary about Star Trek II: The Wrath of Khan