It’s Avengers week here at Strangers and Aliens! Each day we are going to take a look at the characters who will be featured in the upcoming (depending on when you are reading this) Avengers movie. Today is Iron Man. Tuesday will be Hulk. Wednesday is Captain America. Thursday is no surprise to anyone. And Friday will be the team. The Avengers. 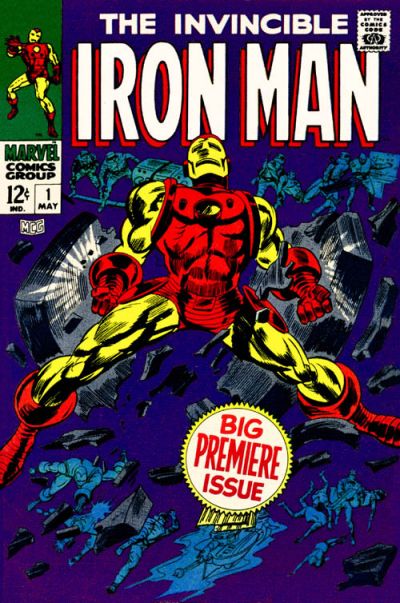 Iron Man #1 -- by Gene Colan. This is not Iron Man's first appearance, but it is the premiere issue for his self-titled series, and it's a perfect example of what makes Iron Man a great character. It's an armored man, and the suit gives him great, great power. Now, normally comic book covers feature poses by women that are impossible in real life. This one features a man in a posed that look painful. But I've never broken through chains in a powered suit of armor, so maybe that's what it looks like? 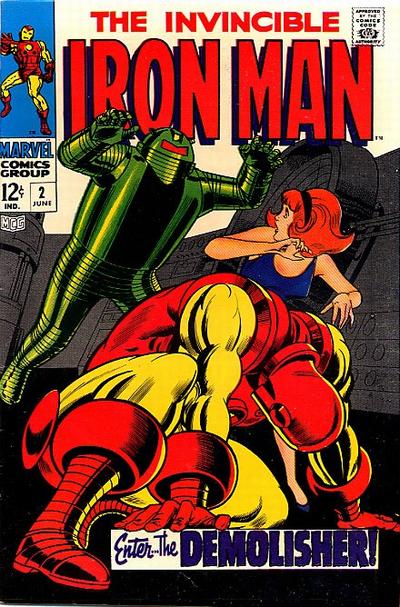 Iron Man #2 -- by Johnny Craig. Okay, this one was included because of the stark (ha-ha) contrast from the last one. Iron Man was knocked down by some other robotic guy -- who looks pretty silly, I should add. And his hand just happened to find the title box to rest on and help keep him steady. The poses are dynamic, and it features a D.i.D. (Damsel in Distress), but after that first cover, this was not the best follow up. Still, it's very interesting.

Iron Man: Enter the Manderin #4 -- by Eric Canete. I know nothing about this series, but the covers stood out to me when I saw them on the shelf. This stylistic interpretation of the character is what Iron Man is about. Technological power pushing man to be something more. 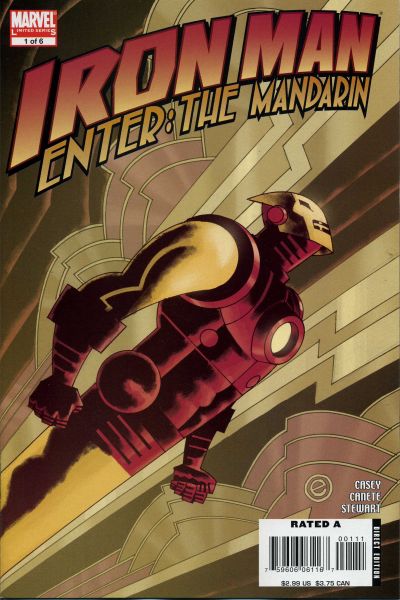 Iron Man: Enter the Manderin #1 -- by Eric Canete. The first issue of the Enter the Mandarin series reminds me of The Rocketeer, and that streamlined art deco style fits the Iron Man character nicely. 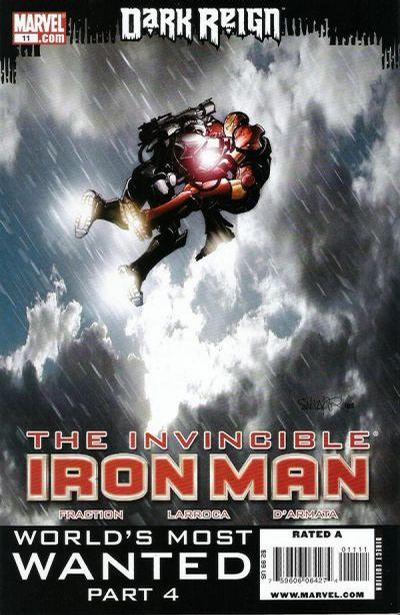 Invincible Iron Man #11 -- by Salvador Lorroca. You can hear the clanking of metal on metal and the crash of the thunder and the ping of the rain and the hum of energy, can't you? The comics had to play catch up after the Iron Man movie came out and the character was a hit. Both the visual and the attitude had to be adjusted. Tony Stark on the page was never as magnetic as Tony Stark on the silver screen.

Invincible Iron Man #1 -- by Joe Quesada. This book was the comic that went out to coincide with the release of the movie, and the design of the character looks like the movie version. To me, Iron Man was always about the armor. I liked Tony Stark in some of the stories I read, but generally "millionaire playboy" Tony Stark was NEVER as exciting to me as "man in the iron suit" Tony Stark. 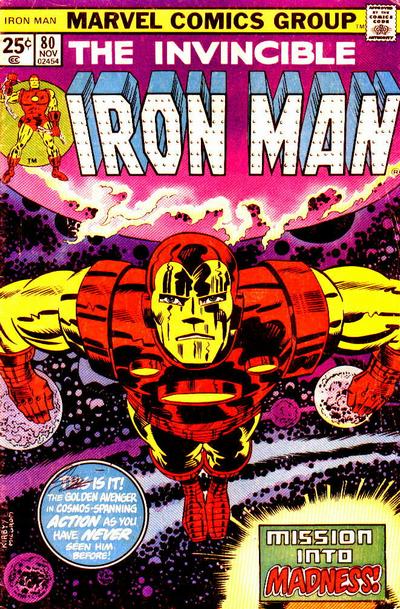 Iron Man #80 -- by Jack Kirby. Jack's "the king" for a reason. He brings an unique energy to whatever he draws, and anyone who tries to imitate him can only do that: imitate. Here he draws out what I've been saying about the character. 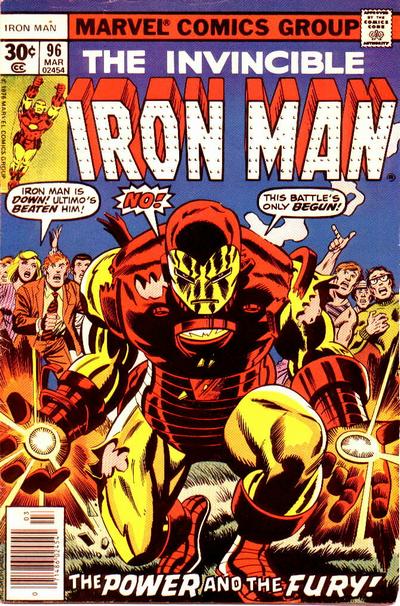 Iron Man #96 -- by Al Milgrom. If those other covers illustrated technology giving man power, this cover illustrates the other part of the character. The man giving direction to the technology.

Iron Man #237 -- by Jackson Guice. I had three Iron Man comics when I was younger. One because Spider-Man was in it, and the other two because of the covers. This one was a story that I loved, though, because it was essentially Iron Man taking the place of Ripley in an Alien movie. In those other two, there was a lot of continuity stuff happening between the action stuff and it didn't make a very big impression. But this story was very self-contained, and I have a lot of fond memories reading it. I even used it as a springboard for a Marvel Superheroes Roleplaying adventure with my buddies. But it was the cover that drew me in. And the inside of this book delivered what the cover promised. 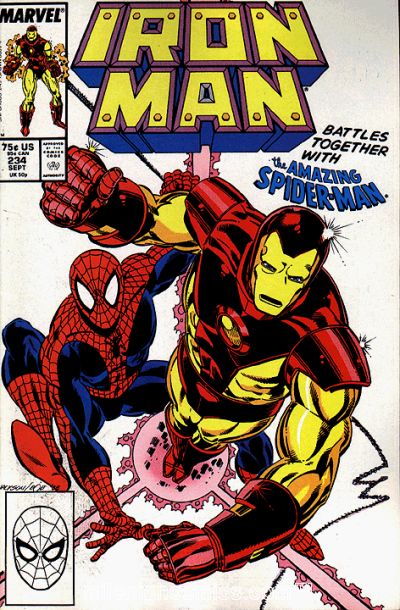 Iron Man #234 -- by Jackson Guice. I bought as much Spider-Man as I could when this comic came out. The Marvel guys were smart to have him guest star in this book, hoping that people would keep buying Iron Man. I did . . . two more issues, to be exact. It worked. It's a cool cover, but I'm only including it for nostalgia's sake . . . 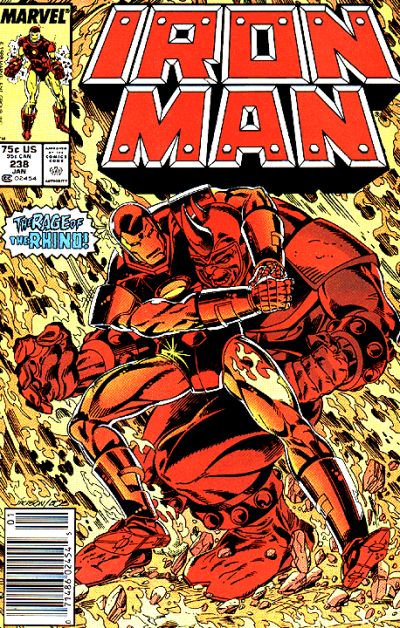 Iron Man #238 -- by Jackson Guice. Another nostalgic cover, but one that almost could make the cut for Cool Comic Covers on its own. The flame and the colors and Iron Man holding Rhino in a headlock. Yes, this happened inside.