It’s Friday! That means another Cool Comic Covers, a weekly (almost) look back at some of the most interesting, intriguing, and engaging artwork in pop culture. This week: 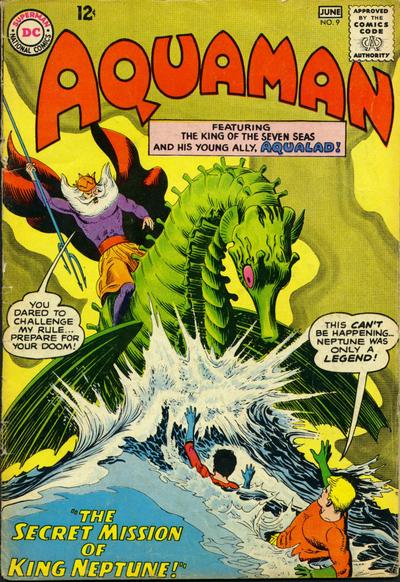 In honor of Aquaman’s loss to Thor in the Super Hero Tournament of Champions, a cool Aquaman cover.

There are actually many, many cool Aquaman covers. In the newest series, each and every cover qualifies, I think.

But because Aquaman lost to Thor, I thought it would be good to present a cover, this week, featuring Aquaman going up against another god. Neptune, not Thor, but still . . .

Nick Cardy’s Aquaman covers are all incredible. If I were to do for Aquaman what I did for the Avengers, I think I would have to include every issue of the new series and every Nick Cardy cover. Nick Cardy has a way of forcing the eye to move around the page, in the way a classic painter might. Everything centers around the explosion of water in the center, from the position of the creature’s head to the position of Neptune’s body, and also his trident, to the two heroes who are almost helpless beneath the large antagonist.

Listeners to the show know that Aquaman is my favorite DC Comics character, and Dr. Jayce is fond of Aquaman, too. So I can almost guarantee that Aquaman will be appearing again in this series of Cool Comic Covers.