As children of the 70’s/80’s, we played video games that were every bit as impressive as today’s video games. The reason? We used our imaginations to, ah, help things out a little bit.

This series of posts takes a look at the video game box art of those early video games and compares it to screenshots of the actual game play. Looking at it now, when video game box art almost looks exactly like the gameplay, it seems strange to think that when we played those old games we saw exactly what we were told we were seeing.

As a result, the box art became an important part of the actual playing of the game. Case in point:

Now, looking at this you might think that this game involves Big Bird, a square, an arrow, and a giant moose head. But no, this is actually a climactic battle between you, the intrepid hero (represented by a moving square shaped dot) and the fierce dragon (played by Big Bird, who needed work between seasons of Sesame Street), using the sword (which, yes, looks like an arrow, but is indeed a sword).

However, we didn’t see Big Bird following a sign that told him how to get to Sesame Street while being menaced by a mutant Bullwinkle. Nay! That WAS a dragon. That WAS a sword. That WAS a hero. And that WAS a castle. And when that dragon chased us through the realm as we tried to return the chalice to the yellow castle, our heart rates elevated. And when we found the sword, we felt satisfaction knowing we could stand against the dragons and achievement when we destroyed the vile beasts!

And part of that was due to this: 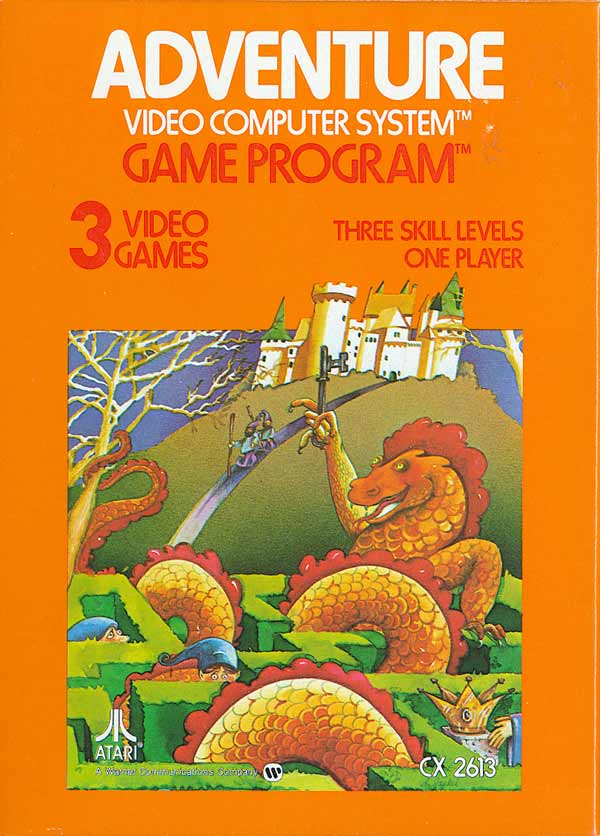 The box art sells it. The box art TELLS it! This game features dragons and mazes and castles and keys and adventurers and all sorts of fantasy tropes! This stylized fantasy artwork, while not Frank Frazetta, evokes all the right elements. Interestingly enough, if you were to come across this in a store, you wouldn’t know what you were getting until you got this game home. Here’s a look at the back of the box: 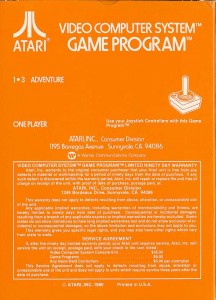 Notice: no gameplay description, no explanation of the plot, and no screen shots.

Now, for some of these entries I won’t be able to do this, but for THIS entry I can actually provide a link to where you can experience ADVENTURE online . . . officially . . . and FREE! Atari’s website has a number of their old games available for you to relive or experience for the first time! You can play ADVENTURE here! 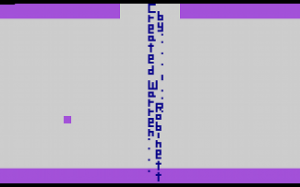 TRIVIA: ADVENTURE contains what may be the first gaming software Easter egg. Warren Robinett wanted to be credited as the game’s creator, so he created a secret room that displayed his name. Clever guy.

Special thanks to Atari Age for making box art available to us!