It’s Friday! That means another Cool Comic Covers, a weekly (sometimes more!) look back at some of the most interesting, intriguing, and engaging artwork in pop culture. This week we take a turn away from American comics and look at the cover to a manga series: 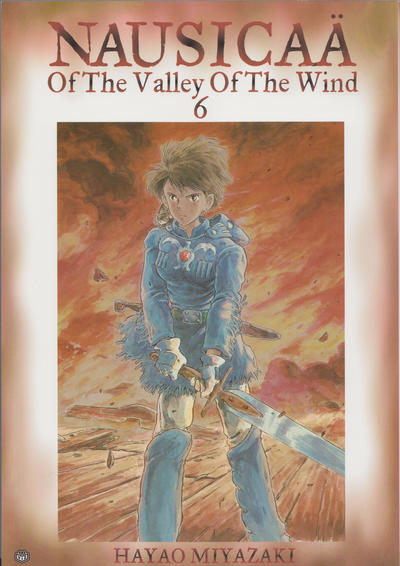 Nausicaa of the Valley of the Wind, vol. 6, Hayao Miyasaki

I love Hayao Miyazaki. Almost anything he does becomes a favorite for me, and Nausicaa of the Valley of the Wind (the movie) is one of the things that caused me to become a fan. Although, My Neighbor Totoro was a discovery for me about the same time — and I loved that as well, even though at the time I didn’t have kids.

Nausicaa’s story is a big, sprawling epic fantasy. With themes of environmentalism and heroism, and an interesting heroine and complex characters (both on the “hero” side and the “villain” side), it’s an inspiration to me as a comic creator.

This cover is one of the strongest images from the series. It perfectly highlight what I love about the series. A determined hero, a cute creature, a dramatic background. The artwork for the manga series is black and white, not watercolor like this, but in this case yes, you CAN judge a book by its cover.

Nausicaa comes early in Miyazaki’s career, relatively speaking. But I think it’s one of his greatest works.

The series is also recommended. Normally, Cool Comic Covers is not meant to be a review series. But I guess i just can’t help myself. I mean, look at that cover!

Check out my review of The Secret World of Arietty for another look at Miyazaki’s work. This won’t be the last mention of Miyazaki on Strangers and Aliens!

Nausicaa of the Valley of the Wind is © Studio Ghibli