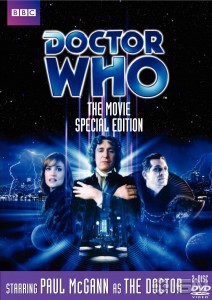 Netflix is the one and only reason I have become such a huge fan of Doctor Who. Before Netflix, I was a casual observer. I enjoyed watching old episodes from the original run (Tom Baker being my favorite Doctor), but mostly as a curiosity, a foray into the history of sci-fi. I was familiar enough with the character and the concepts, because of fond memories finding it on PBS while channel surfing Saturday afternoons as a kid or late Saturday nights in the dorm in college. But until recently the only way I was able to watch it was the random DVD from my library.

The new series was out of reach for me, and while I caught two or three episodes when I visited my parents (who had cable) I was out of the conversation when people would rave about this great sci-fi acton adventure series. I was okay with that. My library didn’t carry the DVDs, and purchasing ANY BBC DVDs was way too expensive.

Netflix had some classic episodes and the entire series of the new episodes. I ate it up and loved it. (David Tennant becoming my new favorite Doctor, and Matt Smith really growing on me as the most recent Doctor.) But since getting into Doctor Who, I’ve been very curious about the “missing chapter” in Doctor WHo history: the 8th doctor, a made for TV movie that was intended to launch a new Doctor Who series after the first run had been cancelled. When I heard it was available on DVD, I was interested. When I saw the price, I lost interest. I hoped it would appear on Netflix, but no luck.

It did finally recently come up for sale at Best Buy, though. So I finally got it. And I finally watched it. And I really, really enjoyed it. It’s a perfect bridge from the cheesy, cheap feeling, positive adventures of the original run and the glossy, hyper-paced, action packed adventures of the new run. And Paul McGann, while not taking David Tennant’s place as my favorite Doctor, or Tom Baker’s place as second, is very, very close and might have taken that position if the TV series this movie was a pilot for had been able to continue.

It is a stand alone movie, and very stylistic in a “made for American audiences in the ’90’s” sense. It is slightly more cinematic than the TV of the time (and, possibly, more cinematic than some of the movies at the time). The story is easily understandable for someone who is not familiar with Doctor Who, while striking a nice balance with many, many connections to the earlier incarnations.

Only one episode was made using this actor as the Doctor, and the events between this movie and the first episode of the new series have not been explored on TV (although, there are some audio dramas with Paul McGann that do just that — I’ve heard a couple and they are very good) and it caused me to have a thought. If I were asked to write Doctor Who (and I haven’t been, nor do I expect to be) I know exactly the story I would tell:

The current Doctor is being menaced by someone or something that is trying to stop him from something he will do in the future. The big reveal: that someone or something is the 8th Doctor. Yes, a past version of the Doctor came across the effects of something the future version of the Doctor did and now is sending agents into time and space to stop his future self from doing it. And it would end with Paul McGann’s death, showing him start to change into Christopher Eccleston . . . who wouldn’t even have to be IN the episode. Just cut away before the transformation is complete!

So all kinds of time and space cat and mouse, only to reveal that the cat chasing the mouse is . . . the past life of the mouse! Could be cool!

Anyway, enough fan fiction. I recommend Doctor Who: the Movie to fans and non-fans. It’s a fun 90 minutes of sci-fi. Not terribly sophisticated, but there are some cool ideas of sacrifice and time travel ethics and good vs. evil, and some interesting imagery (there’s an eye motif throughout that is interesting to behold). However, what I can’t recommend is the price. $35 feels steep for a single 90 minute episode (even though the disks are PACKED with extras). So it is priced, unfortunately, for the hardcore fan only. $10 (the price I got it for at Best Buy) is perfect. The current Amazon price of $22 is at a spot where I’be tempted, but not enough . . .

Some other Doctor Who oddities that I recommend are the BIG SCREEN Doctor Who movies — which are technically another continuity of Doctor Who. These movies star Peter Cushing as the Doctor, although in this series he plays a character who is actually named “Who” and has some sort of doctorate. These two movies were based on some Doctor Who TV stories, but made for the big screen in the ’70’s with a MOVIE STAR. The TARDIS and the Daleks appear just as they did in the TV show, though. (A documentary about these two movies, DALEKMANIA, can be seen on Netflix.)

Again, the fanboy in me would LOVE to see these two continuities co-exist. In fact, I would love it if, when they filmed the final Doctor Who TV episode, if that final TV version of Doctor Who would “die” and be reincarnated into . . . Peter Cushing! These two movies would then become his final adventures, and Peter Cushing would then be the last incarnation of the good Doctor.

Yes. From casual observer to fanboy apologist in less than two years.