You are here: Home › Commentary › SCI-FI/FANTASY FOR KIDS: Phineas and Ferb!

In a previous podcast that Steve and I co-hosted back in the day, in an episode that is long since deleted and gone, I asked “What is there for the current generation that is as inspiring as Star Wars was for us?”

Now, I had heard of this show. I knew it was on Disney channel. And once, when my family was in a hotel, I watched an episode with my kids. But I had no idea how good it was. Even when Steve recommended it, quite highly, in that old podcast during a recommendation segment.

But, like so many things, it popped up on Netflix. I gave it a try. My kids watched it. And we all loved it. All, it should be said, except my wife. She’s okay with it, but not in love with it. Her reply to Phineas and Ferb would be similar to the answer I heard so many times in high school and college when I’d actually find the courage to ask out a girl: “Let’s just be friends.”

But, getting away from the awkward personal history, this show is wonderful! It doesn’t just inspire creativity by being clever and interesting like Star Wars was for me when I was a kid, it inspires by example. The characters in the show are creative and adventurous and fun loving and positive, and encourage viewers to be the same. And it IS sci-fi and fantasy. Alternate universes, parallel timelines, time travel, space travel, quantum physics, super spy adventures, mad scientists, and “magical science” abounds. In one episode, a rift develops between fans of sci-fi and fans of fantasy in the middle of a convention. In another episode, a cute alien falls from the sky, followed by a bounty-hunter. In another episode, they have a musical about time traveling.

A positive family portrayal? A dad who is goofy but respected? Parents who love each other? Siblings who get on each other’s nerves, but still sacrifice for each other? On modern TV? Yes!

It’s the story of two step-brothers, Phineas and Ferb, and their neighborhood gang as they try to make the most of their summer vacation. “Making the most of summer vacation” means creating fantastic inventions that let them have fun and help people. Meanwhile, their sister tries to balance busting them with getting and then keeping a boyfriend. Also meanwhile, their pet platypus is actually a super spy who fighting against an evil mastermind scientist. 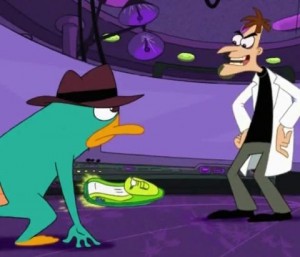 Secret agents and mad scientists are staples of the series and make it fun.

Think about it: they represent two opposing world views. This is the most positive thing, for me, in watching this show. Aside from the blended family aspect, which reflects many kids’ situations and does so in a positive manner by showing brothers who accept each other as brothers and a sister who, while trying to get them in trouble, loves them and parents who accept the kids as their own and kids who accept the parents as their own . . . a positive family portrayal that, unfortunately, reflects a sad truth in our society . . . aside from that, it’s all about the application of our power and energy.

On one side: Phineas and Ferb spend their time blissfully and innocently trying to make the world better for the people around them. Their genius and resources go into that every day, and they enjoy it! They are heroes in that sense. Superheroes formed in a far more positive mould than, say, Batman.

On the other side we have a character who does act out in PURE EEEEVIL, although he does think so, but who acts out in pure selfishness. Selfishness IS evil, don’t get me wrong, but his brand of evil is not formed in the same mould as, say, Doctor Doom or Lex Luthor or Joker. I’m sure he’d like to think he is, but instead he’s motivated by petty revenge and self-centered greed. Yes, he wants to take over the tristate area, but even that is motivated by self-centered pettiness.

So there are two sides: a sacrificial selflessness and a self-centered selfishness. The primary characters don’t even realize that they are locked in an endless battle against each other, because the common factor that links them, Perry the Platypus, keeps it a secret. 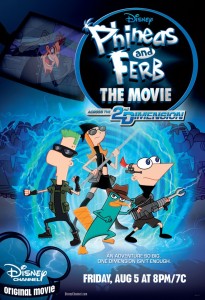 What I thought was the final Phineas and Ferb story came out a while ago on DVD, and my kids and I watched through the entire series and finally watched that movie. The only negative I had about this story, Phineas & Ferb the Movie: Across the 2nd Dimension, was the very ending. Other than a minor quibble that I had but my kids did not (for the spoiler-ish quibble I had, look below under the clearly labelled “SPOILER” warnings*), it is a phenomenal ending to the series! It brings around full circle many elements of the show from many popular episodes. It’s a bigger adventure, worthy of the big screen (I think, although they ARE preparing a big screen live action, sort of, Phineas and Ferb movie). From episode one to this movie, we get an awesome series that is fun for adults and kids.

Now I find that it’s NOT the last Phineas and Ferb adventure. Maybe as far as timeline goes, it is the final story. But there is at lead one more adventure coming, and it is going to be a DOOZY!!!

Phineas and Ferb, as part of Disney, will be crossing over with MARVEL!!!

Check it out below. Maybe this should be its own posting, but for now . . .

Anyway, if you have kids who love fun, well, I recommend Phineas and Ferb as some AWESOME sci-fi/fantasy for kids!

Phineas and Ferb is © Disney

The whole movie built up to a character changing conclusion, but ultimately it was nullified by a reset button of such magnitude that is normally only found in a Star Trek Voyager episode, as all the revelations and character moments are erased from their memories . . . except Perry. However, if the series is looked to be as PERRY’S story and HIS war between his better nature and his sinful nature, personified by his protection of Phineas and Ferb and his battle with Dr. Doofenshmirtz, then the ending is very satisfying. (This is inspired by the possibility that the Dark Knight Trilogy COULD actually be Alfred’s story, not Bruce’s, which I explored in our last episode.) But I’m already reading into it with the whole “Phineas and Ferb are arch-enemies with Dr. Doofenshmirtz”, and I think the “show is actually about Perry” reading is a bit much. So the ending is not as satisfying. To me. My kids were fine with it, because they haven’t seen dozens of episodes a Star Trek Voyager that ended with a time travel twist that made them forget everything. Think about it. How cool would it have been if that “Year of Hell” episode had actually affected the Voyager status quo? But I digress . . .

Also, I wanted the movie to end with them heading off to school, with the wink and the nod that summer may be over, but the adventure is not. I’m okay with the idea that summer doesn’t end in the series, but it would have been cool. To me. My kids didn’t think so.

2 Responses to "SCI-FI/FANTASY FOR KIDS: Phineas and Ferb!"