I didn’t expect to go to Spider-Man so quickly, but with the movie coming out this week, how could I not?

Now, modern Spider-Man games bring that first person web slinging action to your TV screen much more realistically, but I don’t know how many hours I spent playing this little gem for the Atari 2600 from Parker Brothers.

The box art, as you can see, promises exactly what you get: 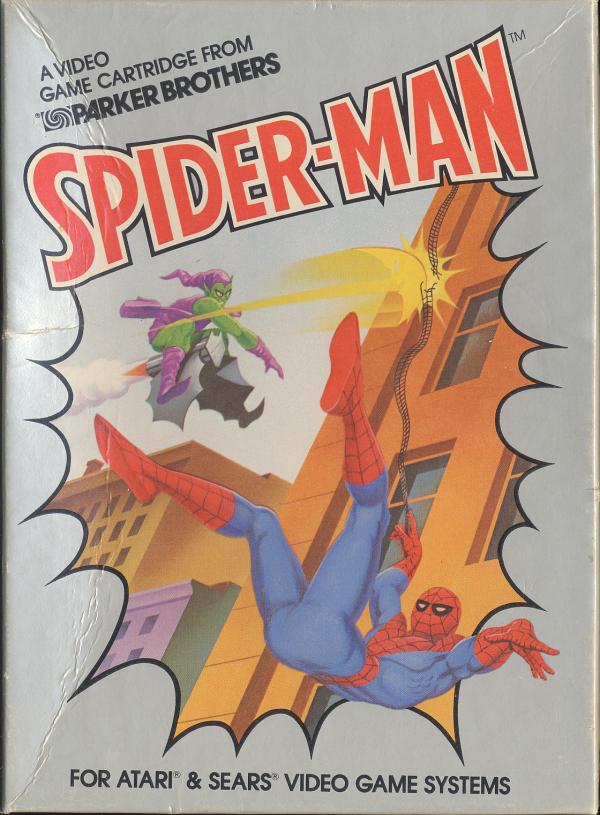 What more could you want from Spider-Man (keeping in mind, this is YEARS before Venom.)

Not on the cover? Bombs and thugs.

Promised on the cover, but not in the game: Green Goblin throwing things.

Here’s a look at the screenshots: 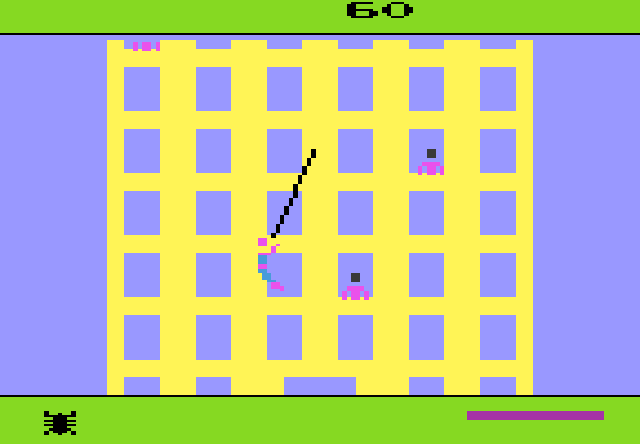 As you can see, the game is pretty much just shooting webs, climbing up the side of a building . . . 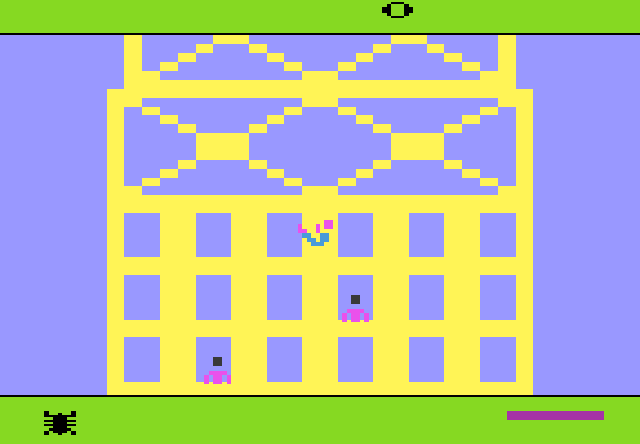 . . . and falling. Your little red and blue blocky thing (which, when we played, looked EXACTLY like Spider-Man somehow . . .) could only stick to walls, not windows. Same for the webs. You could get thugs by touching them with your body, but they would cut your webs as they appeared in windows. And then there were the bombs, found at the interestingly designed architecture at the top of every building.

And at the very top: Green Goblin. Atari Age didn’t have a screen shot of Green Goblin, but if you look closely at the back of the box you can see him here:

All he did was fly back and forth near his super bomb at the very top. You had to angle your webs just right and time it perfectly to get past him to the super bomb.

And then, repeat . . . with a different colored building.

Now that I think of it, like many old school video games, this was pretty nihilistic. You can’t ever defeat the bad guy. Defure a bomb, and he moves on to the next building. Eventually, one of those super bombs is going to go off or your web fluid will run out and you’ll run out of lives and . . . every time you play the game Green Goblin wins.

It just cycles through. until you die. Wow, I’m feeling some despair I never felt when I played this game originally.

As far as a licensed tie-in goes, it’s pretty good. It was easy enough to feel some success when you started playing, but it got difficult enough to be a challenge. And it was very, very replayable. I have a lot of fond memories playing this with my cousins and brother and sister.

Oh, one more thing. Here’s another look a the gameplay, and a better look at the video game version of Green Goblin, in this vintage commercial from 1982.

Spider-Man looks better than he does in the new movie!

Special thanks to Atari Age for making box art and screenshots available to us!