It’s Friday! That means another Cool Comic Covers, a weekly (sometimes more!) look back at some of the most interesting, intriguing, and engaging artwork in pop culture. This week, a striking Star Wars comic . . . 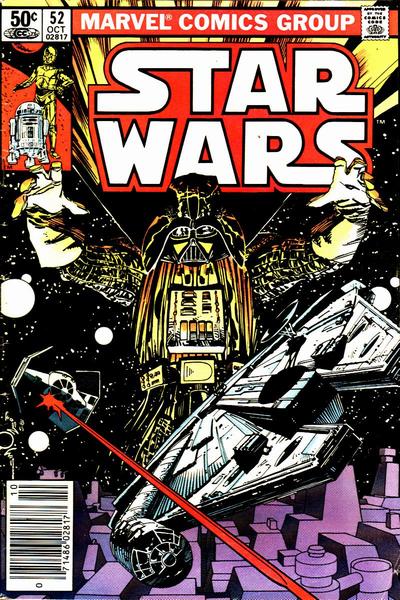 The coolest thing about this comic, when I was a kid, was not the cover. No, the coolest thing was that I had the issue before AND after this one! My entire collection, until this point, consisted of random issues of random series. But here, I had three issues in a row!

That’s not to say that I didn’t appreciate the cover. Just that I was more excited that the previous issue and this one consisted of a complete story! I wasn’t coming in on the middle of a storyline or being left with a cliffhanger. I had a beginning, middle, and end here. (The issue after this one was a different story. It ended in a cliffhanger. I didn’t know how it ended until almost thirty years later. And I was seriously let down. Again, another story.)

The story itself foreshadows Return of the Jedi a bit, taking place almost immediately after Empire Strikes Back, as the Empire is building another super weapon. From Wookiepedia (the single best named Wiki out there):

“We began finding out what would be in the third movie, accidentally. We didn’t do it deliberately. David’s first story after the second movie: the Empire’s building a new Death Star. Lucasfilm said: ‘Sorry, you can’t do that.’ Why not? ‘We can’t tell you.’ So, we said okay, how about if we do a giant cannon floating in space, with no circular shell? ‘Okay, fine, no problem.’ So we called it the Tarkin, wrote exactly the same story with the same gizmo, and nobody cared.” 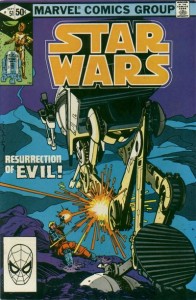 But instead of a direct attack, Luke and the gang infiltrate the space station (portrayed in an incredible double page splash) to destroy it via sabotage. Luke has a near miss with Darth Vader (Lucasfilm would not allow Luke and Darth to meet in the comics), Vader has to deal with the consequences of his officer executions during Empire Strikes Back as his officers form a conspiracy against him (the final panel of issue 51 is something that has stuck with me until this day), and when all is said and done, the whole issue just felt like a perfect follow up to Empire Strikes Back.

The Marvel Comics of the time were the only way to tide me, as a fan, over for the long three years between films. With some of the misfires that fans complain about (like green space bunny-men), this one was just about pitch perfect: an ensemble piece featuring the whole cast doing clever things in the midst of a big, grand adventure.

The cover is something to behold, though, and worthy of the label “Cool Comic Cover”, but in this case the interior is even better. I would love to see this as a print. Even without the fantastic story inside, it works as a stand alone work of Star Wars art. 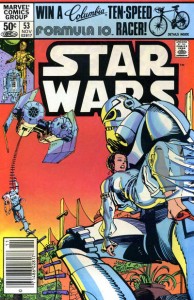 Star Wars #53, by Walt Simonson. Marvel Comics. As a kid, a comic featuring Princess Leia didn’t appeal to me. A comic with swords AND laser guns AND flying car things AND aliens . . . that also happens to feature Princess Leia, well, that was a different story.

The entire Marvel Comics Star Wars run can be found in Dark Horse’s Star Wars: A Long Time Ago collections. Issue 51 and 52 (the storyline I  talk about above, can be found in Star Wars Omnibus: A Long Time Ago… Vol. 3, along with issue 53, a Star Wars comic that used artwork that had been produced for an unpublished John Carter of Mars issue! Yes, just a few coloring changes and art tweaks and a few new pages and Princess Leia was suddenly on an adventure on an alien world. As a child, I had no idea, but the combination of sword and sorcery and sci-fi inspired me . . . and in many ways this was the first glimmer of inspiration for ArmorQuest.