You are here: Home › Commentary › Some Thoughts about the Disney/Star Wars News

A few thoughts I have had after recording the episode about Disney buying Lucasfilm . . .

When I was three or four, my parents took me to a little theater where I first saw Star Wars.

I remember vividly going to see Empire Strikes Back with my family, and I remember the butterflies in my stomach as I walked from the parking lot to the theater to see Return of the Jedi.

Other than my faith as a Christian and my family, I cannot think of anything that has shaped or inspired me as much as Star Wars. Comic books are up there. Star Trek was my preferred route of escapism for many years, and also greatly inspired me. Jim Henson’s Muppets and movies were influential. C.S. Lewis showed me writing that was both exciting and imaginative and thought provoking. But it was George Lucas’ Star Wars that sparked my imagination in ways nothing else could, or primed my imagination so it was ready for things like Isaac Asimov, StarTrek, Lord of the Rings, and on and on.

You can trace a direct line from my career today, writing comic books, books, puppets, and all those things, directly to the awe I experienced when my wide eyes took in those bright lights on the silver screen.

The first comic book I remember reading. I still have it.

I bought the comics and action figures. I dressed up as Luke Skywalker. I wrote Star Wars stories and comics. (My first story that I wrote outside of school, back in third grade, on my own paper in my own room? Star Wars. I called it “The Return of Obi One Kenobi” or something like that. And that, I’ll say right now, is my one defense of fan fiction — it is a great place to learn your craft by using characters that have already been created and that you intimately know.)

I’m not the only person like this. I’m not special.

And I claim no special ownership of Star Wars. I can’t.

I do claim special ownership of memories Star Wars gave me. I claim ownership of gratitude. I claim membership in the multitudes of people who were inspired by Star Wars. Sure, i don’t watch the movies every couple months like I did when I was a kid.  Or every year, like I did in college. Truth is, since The Phantom Menace came out in ’99, I’ve only watched each of the movies twice. Revenge of the Sith, I’ve only watched once total! I’m no longer the fanatic, but I am still the fan.

Heh. I said above I claim no special ownership. That’s because I don’t have FOUR BILLION DOLLARS. Disney did. And oh my, what an uproar this has created!

I’m seeing the rabid fanboy response of “Nooooooooo”. (Only saw THAT joke five times the day this news came out.) I’m seeing the Princes Leia is now a Disney princes meme. Sometimes those have been kind of cute! I’m seeing the “I’ve got a bad feeling about this”, which i thought was clever when I first saw it. Still think it’s clever, but it doesn’t make me laugh now. And then there are the Mickey Mouse ears on Darth Vader, on Yoda, on R2-D2. The most clever of that meme being the one that took the twin suns of Tatooine and added a circle, turning it into a Mickey Mouse head made of suns. The negative response has been interesting, and yet not at all surprising. Star Wars is THEIRS, and George Lucas has ALREADY pooped on Star Wars by making the prequels, right? But where the prequel trilogy was an abomination, the sale to Disney is a desecration! As if something holy and sacred has been turned into a cash cow to sell toys and advertise unrelated things that could never exist in the Star Wars universe.

Like baked beans, now that I think of it. 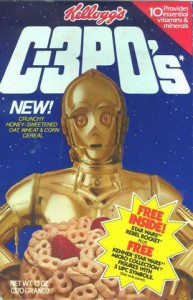 Except . . . it already WAS doing that! All the masked characters — C-3PO, R2-D2, Chewbacca, and Darth Vader especially, have been shilling products for YEARS! Appearing on morning shows, sitcoms, commercials, and cereal boxes. That isn’t going to change.

I’m also seeing a lot unbridled optimism. Finally, those fanboys say, Star Wars is OUT OF GOERGE LUCAS’ HANDS!!! After the prequel trilogy, now, finally, we can see what GOOD filmmakers can do with Star Wars! Joss Whedon’s Star Wars! Steven Spielberg’s Star Wars! Damon Lindeloff will write it and Brad Bird will direct! This is the SECOND COMING for those people who check “Jedi” in their religion question for census takers!

Except . . . like any movie, it can hit or miss. John Carter should have been a hit. WAS a hit, if the world was made up of people like me. But it’s not. So, the movie could be good, could be bad. And there are people who will hate it no matter how good it is, love it no matter how bad it is.

I can’t help thinking . . . this is exciting news. It could mean there is a potentially fun, exciting, and inspiring movie that comes out in 2015. And that’s my real hope. That this news means a filmmaker with a story to tell makes a movie that inspires people to become storytellers — movie makers, comic book artists, novel writers, puppet performers, special effects programmers. That’s my big hope.

Is this really Mark Hamill? How does he look so much like Sir Alec?

And I’m also excited because of the stories they could tell. When I was a kid, I saw the story of a “kid” who grew up to become a hero. As I said in the podcast episode about this, I wanted to be Luke Skywalker, because he was a kid growing into a hero. You know what I really want to see? I want to see Luke, not as the main character, but as the adult who is passing on what he has learned to a new generation. I want to see Luke Skywalker, the “kid” I used to identify with, as an adult I identify with. How many characters in pop culture have grown up with a generation? i know there has to be something, maybe in a long running soap opera or something, but I can’t think of any off the top of my head.

And, I’m excited on a much smaller level, that they might make a fun, diverting movie that I can enjoy watching with my kids who are old enough when it comes out. And it only cost four billion dollars for that to happen.

The news was shocking. The news was exciting. I don’t think the news was something to get worked up into a frenzy about. I’ve seen some really emotional reactions (almost exclusively negative, I’ll add — although both “Noooooo” and “Finally, it’s out of the hands of ‘the beard'” are, to me, negative), and I have to just say, as Yoda said when Luke wanted to see the Jedi master . . . “patience.”

Time will tell if our fears or hopes come true!

One Response to "Some Thoughts about the Disney/Star Wars News"