(This review originally appeared on the Spirit Blade Underground Podcast.)

This post, I’m not reviewing one book — I‘m reviewing a series of books. A series of graphic novels, actually. Marvel’s Season One.

Some background — in my first Thought Clouds review, I reviewed Batman Earth One, part of a series of DC Comics graphic novel reboots set in their own universe and retelling early stories. Both of DC’s Earth One books were New York Times best-sellers, and if there’s one thing that DC and Marvel do well, it’s rip each other off.

And in the time it took DC to produce two books in their Earth One series, Marvel got out SEVEN Season One volumes! Eight, if you include a bonus book that I’ll talk about at the end of my review.

The concept: take their best known characters and retell their stories in a stand alone 100 page hard cover graphic novel. Each of these books is an origin story, and most of them covers a LOT of time, touching well known episodes from the earliest issues of these character’s comic series, but doing them in a more modern style and using modern technology within the stories and with modern references. The idea is is draw in new readers. But the question is, does it?

I’m going to briefly review each of the seven — er, eight — books in the order them came out. 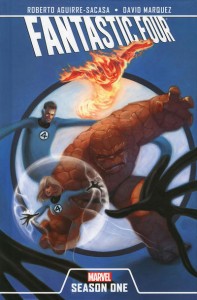 First up: Marvel’s “first family”, Fantastic Four. This is what first made me think they were actually trying to mimic a TV season, because this graphic novel is not a single story but a series of short stories, covering the origin, the attack of Mole Man, and Sub-Mariner’s invasion. David Marquez’s art is superb and Roberto Aguirre-Sacasa’s script is witty and engaging, if sometimes a bit obvious. Truth be told, in some ways, I wish this had been the Fantastic Four movie. And it was a great start to the series. I highly recommend this one. 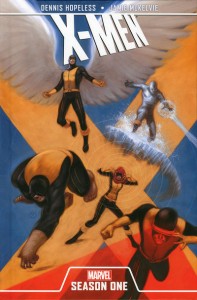 Next: X-Men. I’ll admit some bias up front. I recommend this book, but only if you like the original line-up of X-Man. And I do, I love Cyclops, Beast, Ice Man, Angel, and Marvel Girl. As a team they are a great line up, so whenever I see them together again, I’m game to give that book a shot. I don’t really read X-Men otherwise. Jamie McKelvie’s art isn’t as outstanding as Fantastic Four, but Dennis Hopeless’s writing is still good quality. I’ll admit, though, part of that comes from me just getting to see these five interact together. Unfortunately, the ending, whole not quite a cliffhanger, sort of leaves you hanging.

The third Season One graphic novel was Spider-Man. Cullen Bunn’s script allows Neil Edwards’ artwork to really shine, providing probably the best artwork of the bunch, with some awesome splash pages, and the story hits all the beats you’d expect in a Spider-Man origin story. The one strange thing? The main villain (aside from the burglar who kills Uncle Ben) is The Vulture! A fun Spider-Man book. 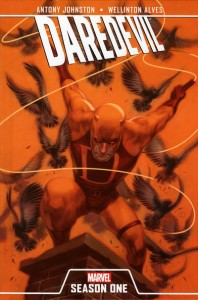 The fourth book, and the last in the first wave, Daredevil, written by Antony Johnston and drawn by Wellington Alves. This one was a bit different, in that it seemed to be a completely original story, While the other three books had original elements, they also had a lot of recognizable elements from previous tellings of the character’s stories. Daredevil seemed to be a completely new story, and an interesting one. The story here gives the relevance score a bit of a bump, when I get to that. The artwork is strong, but not as good as Fantastic Four or Spider-Man. But the story makes up for it. 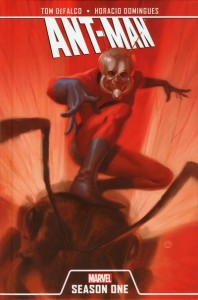 Wave two consisted of three books. The first, Ant Man, is a WEIRD choice. It’s written by Tom DeFalco, with art by Horacio Domingues, and while I don’t know much about Ant Man (other than loving the concept!), I have read his early adventures in one of those old Marvel Essentials that printed like 500 pages of comics on newsprint in black and white. I don’t remember any of this. And I don’t care to. This was a lackluster volume, with surprisingly amateur artwork and a story that loses all the fun of the concept by trying, and failing, to make it more believable. Add a slightly confusing and confounding story, and you get the first of these books that I don’t even weakly recommend. Pass on this one. I just can’t believe they released a book with artwork of this quality. 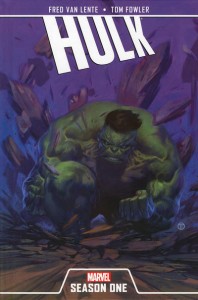 The second book of the second wave is Hulk. The stylistic artwork by Tom Fowler fits the tone of the subject, Hulk, perfectly. Fred Van Lente writes a story that is is wholly original, although it can be a bit confusing. Even the parts of the story you already know were a bit confusing. But only at first. And when things stop getting confusing, they get interesting. There are some interesting twists on classic Hulk themes, here. And the story is weird, in a good way. If you like bizarre monster superhero comics, this is your book.

The most stylistic artwork of all of these books comes from Emma Rios, in Dr. Strange, the final book of wave two. Again, this book felt like a movie. Written by Greg Pak, we get a world-spanning action adventure about the “master of the mystic arts”. It’s a cool book, and has to do with themes of faith, selfishness, and selflessness. There’s very much a Lord of the Rings feel to it all (and they “hang a lamp shade on it”, so to speak), and there is a lot of magic going on. With all the magic and the incessant use of dammit and variations thereof, I could see some Christian readers being uncomfortable with the book. Also, the artwork is gorgeous, but sometimes confusing, and I can’t tell if that is a script problem or an art problem. 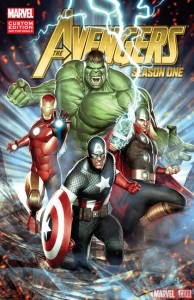 Now, the bonus eighth book: packed in the Blu-Ray of a limited special edition of The Avengers, available only at Walmart, you can get the graphic novel of The Avengers Season One, which is slated for publication in March of 2013 for some reason. Peter David, a fan favorite writer, scripted it with five different artists. And it’s a solid story about an early Avengers adventure, but not the first. I have a feeling the multiple artists are a result of wanting to get things done quickly, before the release of the Avengers movie. Possibly my biggest complaint, after heaping this high praise on it, is that it ends on a really unneeded and juvenile sex joke.

So do they do the job? Would they attract new readers to comic books? Yes. And no. New readers might like these books, except Ant Man, but I can’t imagine them becoming fans of the monthly series or anything like that. In fact, each Season One book has the 100 page original story, and a reprinting of a current issue featuring that character or team — and it’s jarring how different they are. If you read X-Men Season One, and then get interested in reading X-Men comics, you will be completely lost. Same with the other characters — these are early stories of characters who have changed a LOT over time, and these early stories do not connect with current continuity at all. A reader of these books might want more — but these books really will only pique a new reader’s interest in comics in general or in a Season Two. Except Ant Man.

Now, what about theme? What about relevance? Unfortunately, there’s not a lot here. Mainly, what you get is classic superhero themes. “With great power comes great responsibility” type of stuff. However, Daredevil and Hulk and Doctor Strange all delve deeper into some new territory, and their stories have some deeper themes. There’s some interesting food for thought — even if they approach the themes from an angle that I, as a Christian, wouldn’t, they do explore some interesting ideas.

Each book comes with a download code, so you can get a free download of the book for  your digital devices and enjoy them electronically. Except Ant-Man . . . paper or pixels, it’s not going to make any difference for that one.

Bottom line, I recommend all of them . . . except Ant Man. If you like the spotlighted character in any of these Season One books, and just want to read a good story that’s not bogged down by years of backstory, you’ll enjoy these. But even if you aren’t a fan of the characters, and you’re more a fan of superhero stories, these are still solid reads.

(You can purchase all of these through Amazon . . . and doing so helps support Strangers and Aliens!)