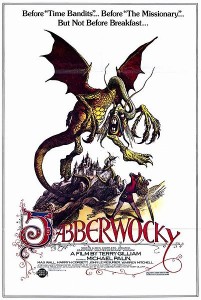 Terry Gilliam is my favorite film director. So this winter, I’ve decided to watch his movies, in order, from Jabberwocky to The Imaginarium of Dr. Parnassus. (And, when The Zero Theorem comes out, I’ll add that one in, too.) For this series, I will be rating each movie on a scale of 1 to 12 . . . monkeys.

Terry Gilliam is probably best known for his work as the animator of the cut out cartoons from Monty Python and directing parts of the Monty Python films. I’m skipping his Python stuff for this “film festival”, because there’s just so much of it. And besides, what can I say about Holy Grail that hasn’t been said. Over and over and over. I’ll say this: I like Holy Grail — a LOT — but I never enjoyed it early on because I watched it with thespian-types who would quote the whole, entire movie AS IT HAPPENED ON THE SCREEN. Really, it’s much funnier when the Pythons are delivering the lines, not a bunch of high school actors who are drowning out the audio so it looks like the people on screen are lip syncing, and lip syncing badly, to fake British accents, and bad fake British accents.

That’s all I’m going to say about the Pythons.

Except this: Jabberwocky was the first film Gilliam directed after co-directing Holy Grail. And as a result, it FEELS like it. It feels like it is half a Python film and half a Gilliam film. Michael Palin stars in the film, and watching the movie there were a few characters that just seemed to be miscast. Not that they did a bad job, but it seemed like they were written with other actors from Monty Python in mind.

The movie itself is interesting. There are some flashes of brilliance. Some sequences would fit right in to a Monty Python episode, with their absurdity and wit. Other sequences have a real visual flair and there’s some interesting lighting in the interior castle scenes. At first, it looks like the scenes are badly lit, but they were filmed that way on purpose, as the castle is almost a character itself. The creature design on the Jabberwocky is an incredible melding of Godzilla-ish man-in-suit and John Tenniel’s original Alice in Wonderland Jabberwocky design.

Jabberwocky is an illuminating look at the beginning of a director’s career. I like looking at the early work of creators I respect, and with this you have a perfect example.

Note: this movie really has NOTHING to do with Alice in Wonderland’s Jabberwocky. It tries to. But it doesn’t.

The movie also has a LOT of potty humor. Juvenile stuff that I just don’t think would have made the cut if this movie was a Monty Python movie. (Then again, Monty Python was not afraid of potty humor.) And while there’s some flashes of greatness, humor wise (the knights’ tournament sequence being one), there’s also a LOT that falls flat and just doesn’t work at all. Michael Palin’s character gets peed on and then he talks to his lady-love’s father, whose bare bottom sticks out the window so he can poop in the first five minutes. Palin’s character gets peed on five or six times after that. It wasn’t funny the first time and doesn’t get much better the times after that.

If you like Monty Python, this is a good movie to tackle. It’s a historical footnote. If you like Terry Gilliam as much as I do, it’s an absolute must-see, because it’s the launching pad for all the films he directed. More than an historical footnote in his career, it’s an historical turning point, away from supporting player as animator and toward visionary director. But I’d be hard pressed to recommend this movie to very many people.

Spiritually, this movie is almost completely void. In telling the story of a man who would be hero, instead of being pulled upward with the hero, the film mocks the hero’s journey and gives us an unsatisfactory character arc. However, this is part of what I like about Terry Gilliam. He does not do the expected, especially with his own stories. He rebels against traditional storytelling, which is a blessing and a curse. In this movie, it’s more of a curse . . . but it sets the stage for what is to come.

In this movie, Gilliam was cutting his teeth as solo director, and preparing himself for his next movie: the one that would put him on the map, and our next subject: TIME BANDITS!

Have you seen Jabberwocky? What did you think of it? Do you plan to see it?

Movies this series will cover:

Not
Jabberwocky 4 monkeys out of 12
Time Bandits
Brazil
The Adventures of Baron Munchausen
The Fisher King
12 Monkeys
Fear and Loathing in Las Vegas
Lost in La Mancha (not a film by Gilliam, but a documentary about a Gilliam film: The Man Who Killed Don Quixote, which was started but, due to a number of reasons covered in the film, not finished)
Brothers Grimm
Tideland
The Imaginarium of Doctor Parnassus
The Zero Thereom (when it releases)