UPDATE: This 2012 blog post has been expanded into an actual SERIES of posts that you can find here: http://strangersandaliens.com/category/christmas-2/strange-christmas-movies/

These movies are not Christmas movies — “weird” Christmas movies like Santa Claus Conquers the Martians would be a nice article for another day. These are movies that fit into the sci-fi/fantasy venue (so, no DIE HARD or DIE HARD 2 . . . as much as I tried to justify the “superhero” action hero aspect of things) and have Christmas as a plot element or setting for part of the movie, but were not intended to be a holiday movie. 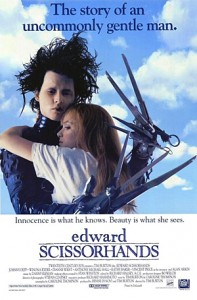 EDWARD SCISSORHANDS — In this movie, the Christmas element is meant to amplify the feelings of isolation and loneliness that Edward feels after he had experienced acceptance by people in a suburban neighborhood. He had spent his whole life alone, was found by an Avon lady and brought into their community, but after some misunderstandings he was rejected just in time for Christmas. And this is the power of Christmas — probably why it is used in so many movies that aren’t otherwise about Christmas. Because of the traditions and the feelings of love and peace and joy that are meant to be associated with it, when we see someone outside the warmth of the indoor celebrations, the coldness of the snow has even more effect.

CHRISTMAS MESSAGE: A dude who grows up with scissors for hands will end up with mad ice carving skills . . . and ice angels are awesome. 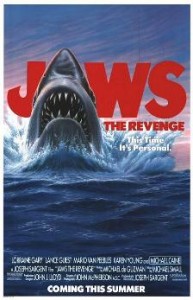 JAWS IV — The Christmas element of this movie is used to build the sense of family. This movie is terrible, but it tries so hard. If you watch the movie and squint your eyes and switch out the shark for a magical monster, then the movie almost makes sense. Almost. This is a movie about two mothers who have lost their children and husbands to a war. The shark mother attacks first, a few days before Christmas. The rest of the movie has the human mother trying to protect her children, which the shark mother is able to find somehow from hundreds of miles away. It’s fantasy, and if you accept that then the other two sequels make more sense, too. Almost. The series has to be fantasy with a magical shark family, how else do you explain that unusual shark attacks happen no matter where in the world this family goes?

GREMLINS — This may be the most typical Christmas movie on this list. It takes place at Christmas time and involves a Christmas gift (Gizmo). It does more than reference Christmas. But it’s a fantasy horror movie first and foremost. And a comedy at that. I’m not a big fan of horror comedy, and I didn’t see this movie until I was an adult. I have a feeling I would have liked the subversive nature far more if I had seen it as a kid. I had a toy Gizmo, though, and a children’s storybook that covered the final half of the movie, which made it look like a bright adventure, not a dark comedy.

CHRISTMAS MESSAGE: Don’t make Christmas all about the gifts . . . if gifts are too important, they just may consume your family. Literally. 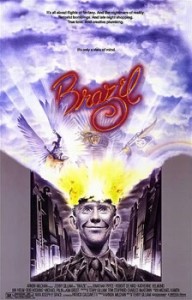 BRAZIL — Brazil is a favorite movie of mine. It is a Terry Gilliam movie, and I will be talking about it at greater length next month. Terry Gilliam is probably my favorite director, and this is probably my favorite of his movies. It is off kilter and weird and visually arresting. It is about the power of imagination, the power of love, and the power of bureaucracy . . . and the Christmas element is mainly to point out the evils of commercialization in this world of surface level relationships. One man wants something more, that something more being the love of a woman he dreams about and then, later, meets. It ends on a down note (Terry Gilliam always subverts the themes that he explores) but, in some ways, it really doesn’t. Yes, teh bad guys seem to win, but the truth is like everything else they only win on the surface level. 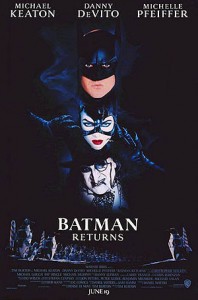 BATMAN RETURNS — For a summer blockbuster, this movie chose a strange time to set things. For some reason, it takes place at Christmas and does all sorts of story gymnastics to also take place during an election. Of course, it HAS to be a Christmas movie, because it has numerous other twisted references to the story of Christ (and Moses). I am not making this up. Okay, maybe I am. But I’m not making it up in a vacuum. Tim Burton did plenty to support my claim. Think of it. Penguin is sent down the river in a basket and is found by an adoptive family. Thirty years later, he comes out for his mission . . . at Christmas time. His return means the death of all the first born sons of Gotham. When he dies, he does so with his arms outstretched, and he is carried by his followers in that way. I’m not saying this movie is meant to be a parallel of Christ or Moses, just pointing out that it’s set at Christmas time and it references these things. Beyond that, it serves as an indictment of the commercialism of Christmas. Sound familiar? 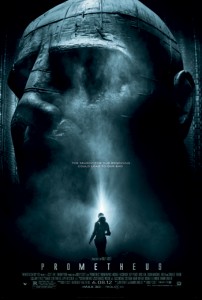 PROMETHEUS — This movie takes place on Christmas, and it was probably more of an element when the script actually included the whole subplot elements of Jesus Christ actually being an alien that humans killed which caused the alien Engineers to create the alien Aliens to wipe us out. Yes, that was originally the plot. Fortunately it changed. But did it change for the better? That’s up for debate. I like the movie. Anyway, now the Christmas element seems to be an emotional thing. They celebrate Christmas because it is  tie back to the planet they left so far behind. 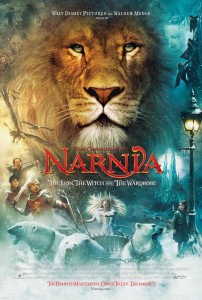 THE LION, THE WITCH, AND THE WARDROBE — How could I miss this one! Angie mentioned this in the comments, and the only thing I can think of to make an excuse is that this was a book first so I wasn’t thinking of it as a movie. Yeah, that’s what I[‘m going with. Of course, in this movie Christmas symbolizes . . . Christmas! It means the coming of Aslan, who has come to break the hold of the icy winter that holds all of Narnia in its grip. In one scene, Father Christmas comes and gives three of the protagonists gifts. Gifts that will be used in battle. This scene foreshadows two things: that Aslan’s return marks the end of the Witch’s spell, and that casting the witch out will come at great cost.

CHRISTMAS MESSAGE: Christmas celebrates the coming of the one who can free you from the icy grip of evil. And swords make awesome gifts.