You are here: Home › Commentary › Thoughts on Star Trek’s Omega Glory and the 4th of July! 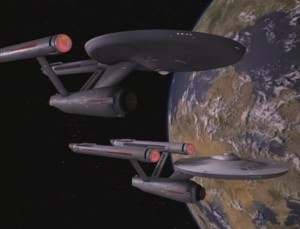 Seeing extra starship always got me so excited!

Some thoughts after my son and I did our yearly viewing of “The Omega Glory,” the classic Star Trek episode that features a world parallel to our own, in which a war between the Yangs and the Kohms nearly destroyed the entire population of the planet. It’s from the second season, and written by the series creator, Gene Roddenberry himself!

This is an episode I loved as a young viewer, because there is action and emotion with the characters and twists and turns in plot. We get to see a second starship and another starship captain!

Of course, watching it as an adult, I recognize that the science fiction concepts — parallel development of another planet and a disease that, considering its importance in the first scene, has a pretty convenient cure — are weak at best and completely ridiculous at worst. But the sci-fi ideas and questions make up for it, I think.

1. The set up. This episode has a captain who is the sole survivor of his starship: Captain Tracey of the USS Exeter. The people of his ship got a disease from the planet, and when they returned to their ship they died horrible deaths that somehow turned their flesh into crystals. Crystals that, according to D.r McCoy are all that’s left after water is removed from the body. 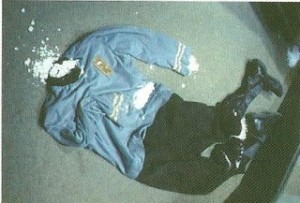 McCoy: Jim, the analysis of this so far is potassium 35%, carbon 18%, phosphorus 1.0, calcium 1.5. Jim, the crew didn’t leave. They’re still here.
Kirk: What do you mean?
McCoy: These white crystals is what’s left of the human body when you take the water away, which makes up 96% of our bodies. Without water, we’re all just three or four pounds of chemicals.

“We’re all just three or four pounds of chemicals,” he says. And yes, from a strictly scientific standpoint, there is truth in that statement. But there is more. So much more.

I find it interesting that they open with this strange, ridiculous disease. It would be silly except for one thing. On a thematic level, the climax of this episode is about what MORE there is in humanity.

The interesting thing is most of the fighting is between Kirk and Tracey. Kirk, the authority, and Tracey, the rebel. Kirk, the idealist, and Tracey, the capitalist. (Capitalist? Yes, he wants to harness a resource of this world — something that could perhaps be a fountain of youth.)

Side note: this plot was ripped off in Star Trek: Insurrection.

3. The Words. Toward the end of episode, sacred words are used and recited. But here’s the problem: the words lost meaning.

First, Captain Kirk realizes that some of the words are actually the pledge of allegiance. Then he is asked to recite more words to prove that he is not evil, but he does recognize them at first, because they are mangled so badly. The words have become just syllables. Sounds. Words without meaning.

If you thought he got the pledge bad, you don’t want to hear him try to sing the national anthem!

Yang Leader: Ay plegli ianectu flaggen, tupep like for stahn…
Kirk: And to the Republic for which it stands, one Nation, under God, indivisible, with Liberty and Justice for all.

Indeed, the people of this planet do not just have documents from American history (and yes, you have to accept this ridiculous conceit or parallel development). They also seem to have the Bible. So when there is a conflict between Kirk and Tracey, questions of good and evil are brought up. Kirk asks if in their book, does it not say that good will defeat evil. The answer: “Good shall always destroy evil.” Tracey jumps on this and asks if their holy book describes the evil one. The answer is a picture. 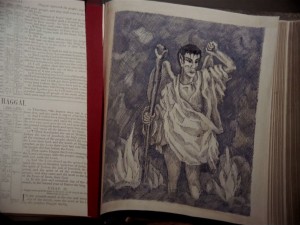 Gene Roddenberry himself wrote this episode, and it should be remembered that he had received notes to take Spock out of Star Trek because he looked so devilish. Can’t help wondering if he is taking a dig at that here.

But the truth is, again, these are words (and images, apparently) without meaning.

And so we are treated to perhaps the most classic of all Captain Kirk’s monologues:

Among my people, we carry many such words as this from many lands, many worlds. Many are equally good and are as well respected, but wherever we have gone, no words have said this thing of importance in quite this way. Look at these three words written larger than the rest, with a special pride never written before, or since, tall words proudly saying, “We the People”. That which you call Ee’d Plebnista, was not written for the chiefs of kings, or the warriors or the rich or the powerful, but for ALL the people! Down the centuries, you have slurred the meaning of the words, “We the People of the United States, in Order to form a more perfect Union, establish Justice, insure domestic Tranquility, provide for the common defence, promote the general Welfare, and secure the Blessings of Liberty, to ourselves and our Posterity, do ordain and establish this Constitution”. These words and the words that follow, were not written only for the Yangs, but for the Kohms as well! They must apply to everyone, or they mean nothing!

Back to the disease at the beginning of the episode: here is where we see what more there is to us than just those chemicals. There is also heart. There is idealism. Tracey wanted to extend life, Kirk wants to give life meaning.

How easily do those words lose their meaning? How easily do scriptures and prayers just become things we say or read?

Yes, from a science fiction perspective, this episode of Star Trek has some problems. Similar to the themes of the episode itself, its not the words that make this episode great, its the meaning behind them.