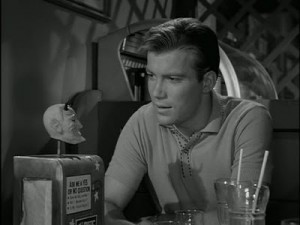 With SHADOW and SUBSTANCE, we start a new subseries with a look back at the Twilight Zone, starting with the William Shatner classics “Nick of Time” and “Nightmare at 20,000 Feet”!

The Twilight Zone is a giant of sci-fi and fantasy. Whether you are a long time fan of the series or just discovering it, this series is meant to be an exploration of the rich themes and classic twists of this series that shaped sci-fi for decades after it first hit airwaves.

Join us as we talk about William Shatner, Richard Matheson, and Richard Donnor(?), looking at questions of fate and sanity and what it could mean for those of us who are not just fans of sci-fi, but also followers of Christ!