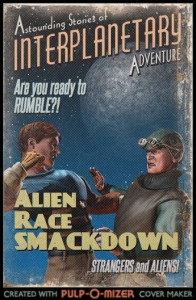 Have you ever wondered what it would be like if the Galactic Empire fought Galactus? How about the Green Lantern Corps VS the Borg? Well your wondering days are over! (Sort of). Join Evan and Steve as they put their imaginations and Sci-Fi knowledge to use, speculating the winners of multiple 3-way matches between dozens of Alien Races! Part of a continuing series, this first installment is sure to contain some laughs and surprises, AND we want your feedback! If you saw a different outcome than we did, be sure to let us know!

Aliens featured in this episode include the Autobots, the Battleship Aliens, the Borg, the Brotherhood of Evil Mutants, the CIS, the Deceptions, the ET Aliens, Galactus, the Green Lantern Corps, the Green Martians, the Tharks, the Hutts, Jawas, Klingons, World of the Worlds Martians, Ming the Merciless’ Empire, Rathtars, Romulans, Sand People, SHIELD, Space Godzilla, Super 8 Aliens, Thanos, Therns, Ultron, White Martians, and the X-men!