You are here: Home › Reviews › REVIEW: William Shatner’s “The Captains” 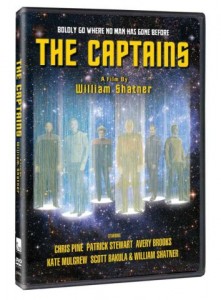 I’m a big fan of William Shatner. If we ever do a podcast to tackle the classic “Kirk vs. Picard”, there will be no question what side I fall on. I will listen to opposing arguments, but I will not change my mind. (Gauntlet thrown, Dr. Jayce.) I enjoy watching Shatner in Star Trek, in Twilight Zone (the series and the movie), in Boston Legal. I’m a fan of Shatner as an actor.

As a presence, as a celebrity, as a musician . . . that, I’m not so much a fan of. Although I know that his presence is a large part of his appeal as an actor.

In “The Captains”, William Shatner interviews some of the other captains from the Trek franchise: Patrick Stewart, of The Next Generation; Avery Brooks, of Deep Space Nine; Kate Mulgrew, of Voyager; Scott Bakula, of Enterprise; Chris Pine, of the new Star Trek movie; and Christopher Plummer? (He played a Klingon in Star Trek VI.)

The interviews are all interesting, although they sometimes seem to be more Shatner pontificating and less Shatner interviewing. His interview with Patrick Stewart alternates between two old friends reminiscing and a “mutual admiration society” (although it does seem very, very genuine – and should be, they are both accomplished actors in different ways). Bakula’s interview feels like a couple of peers getting to know each other, as they both have very similar stories and experiences in their careers and lives. With Mulgrew, Shatner seems to be a little more aggressive, pushing her to answer questions when she doesn’t to his satisfaction, but she’s game. Brooks’ interview is quirky and fun, but I feel like with that interview, more than any other, they are simultaneously aware of the camera and unaware as they sing and goof around in a way that feels both staged and improvised. The interview with Pine is fun to see, especially the arm wrestling (yes, young Kirk and old Kirk arm wrestle – in round one, young Kirk easily overpowers old Kirk, round two has old Kirk showing he doesn’t believe in the no win scenario so he cheats, and round three resolves itself nicely).

Two interesting segments: hearing Scott Bakula, Patrick Stewart, Kate Mulgrew, and William Shatner talk about their family life when they were working on their different series (although for Bakula, it was more about his life during the filming of Quantum Leap).

Another interesting segment is hearing all their views of death. Both of these segments are interesting because they seem to be pretty raw and pretty open about things (I say “seem” because I’m always wary of what people say in front of a camera).

As a Trek fan, The Captains is an interesting hour and a half. There are thoughts about the attraction of Star Trek, a recurrent segment of Shatner walking through a Star Trek convention (the fans are delighted, and Shatner enjoys delighting them), and some exploration about what it means to be a fictional leader and how that might translate into their real life.