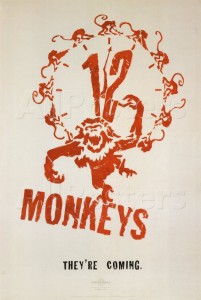 What it’s supposed to be: A remake of the artsy French film Le Jette, this was Terry Gilliam’s time travel story, starring Bruce Willis as a time traveller from the future being sent back in time to help find the origins of a plague that eradicated most of the human population and also starring Brad Pitt as a lunatic who just might have been the one to release the plague. A brilliant movie, playing with perspective and time frames and truth and sanity.

Why it’s a Christmas movie: December 12, 1996. An epidemic demolishes the world’s population. Against the back drop of Santa Clauses and Christmas shoppers and Christmas decorations, Bruce and Madeline must try to stop the plague from being released. And Madeline Stow leaves a message she thinks for the future, but then when she realizes that it’s probably an insane delusion she gives a sarcastic “Have a merry Christmas!” This is probably the roughest of the Christmas movies, though, earning it’s R-rating with violence and language.

Thoughts: I love this movie, almost as much as I love Brazil. Almost.

Bruce Willis plays the main character who, even if everything he believes is true, is still on the edge of being unhinged. Brad Pitt’s manic energy is the best performance I’ve seen him give (admittedly, I haven’t seen everything he’s done) — it’s funny and magnetic and crazy. Madeline Stow plays the person from our time who gets sucked into Bruce Willis’ obsession with the plague as we bounce back and forth through time.

This movie features Gilliam’s dynamic visuals, some powerful performances, and a time travel story that wraps around itself in a way that is at first confusing and then completely logical. In the end, there are questions of if time can be changed and was it delusion or is this just a single timeline that people are traveling up and down or multiple timelines. I have my theory, but I’d rather just say this: watch this movie.