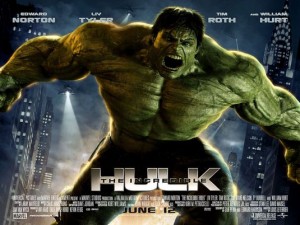 THE INCREDIBLE HULK (reviewed as a single movie)

So, exit everything that had to do with Ang Lee’s movie . . . and enter Edward Norton, Liv Tyler, Tim Roth, and director Louis Leterrier.

Personally, I liked the film. It was okay. The Hulk scenes are fine. The special effects decent. The story a bit convoluted, but more appealing to the general public than Ang Lee’s Hulk. The actors all feel like they are all acting in their own movies, not reacting to each other with any kind of chemistry, but it does not distract from the huge green monsters fighting each other.

Not high praise, I guess. I did enjoy the multiple callbacks to The Incredible Hulk TV series. And honestly, the plot of this movie should have been the plot of the first movie, with Hulk fighting another hulk-ish monster, with a physical conflict we can understand instead of the metaphorical finale found in Ang Lee’s movie.

I didn’t connect with the character, though. Edward Norton is a great actor, and I expected him to be a perfect Bruce Banner. I never felt I was watching Bruce Banner. I felt I was watching Edward Norton ACTING! And the ending (not the bonus ending, which was funny, but the actual ending) was not true to the character arc, instead trying to copy Tony Stark’s “I am Iron Man” moment.

It made about $18 million more than Ang Lee’s movie, but cost $13 million more as well. It wasn’t the runaway success they hoped it would be as the follow up Iron Man. But it was serviceable.

THE AVENGERS PART TWO: THE INCREDIBLE HULK (reviewed as a part of a series)

The Incredible Hulk is essential viewing.

It gives the backstory to a character who looks to be a vital part of the Avengers team, setting up Bruce Banner the scientist, Hulk the monster, their relationship with the military, and their life on the run from those who want to catch them and use them. Using this set up, it would seem like in The Avengers, they will track down Bruce Banner the scientist because they need his intellectual help, but they will also summon Hulk the monster to because they need his physical help.

It’s the weakest chapter of the bunch, but each character needs their introduction, and this is Hulk’s. It’s ties to the other movies are also the weakest, mainly because at this point I still don’t think they knew what their big plan was going to be. From here, they could do a number of things, including (as i hoped) had the Hulk be the villain (at first, anyway) of The Avengers. 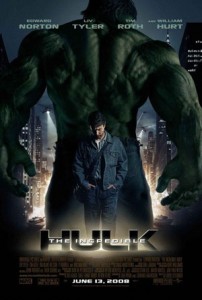 The story of the Hulk is one of anger and emotion and out of control power, fueled and directed by anger.

In the film The Incredible Hulk, Bruce Banner struggles to control his rage, and blood pressure, through many different means, while also looking for a cure. By the end of the movie, the search for the cure has been largely abandoned, and the implication is that he has embraced the “curse.” My hope, however, is that as the character is used in The Avengers that it’s not someone who is learning to embrace the monster, but instead it’s someone who tries to focus the out of control anger and give it some restraint.

That was my primary problem with the character as portrayed in this movie. The ending is a very humanistic one. Embrace the physical and natural. Humans flaws are not flaws to overcome, rather they are just a natural part of life, so don’t just live with it, enjoy it.

Anger in and of itself is a useful tool. Its presence can often help identify injustices or wrongs and push individuals into action in correcting them. But it can also come from self-centeredness, selfish ambition, and perceived injustices or wrongs. When anger itself is the sole driving force, instead of pushing someone toward positive action, it becomes blinding.

Proverbs has some great wisdom about anger and rage, like Proverbs 30:33: “For as pressing cream produces butter,  and as pressing the nose produces blood, so pressing anger produces strife.”

And Proverbs 15:18: “The hot-tempered stir up dissension, but those who are patient calm a quarrel.”

I’m curious where they take this character. They changed the actor, so it’s possible the arc he seemed to be on in this movie gives way to the arc I’d like to see him take. I would like to see a slightly intelligent Hulk, and his alter ego Bruce Banner, struggling to control the rage, not embracing it.

UPDATE: Of all the Hulk films, The Avengers is actually the best. In terms of acting, this is the bet of the three Bruce Banners. In terms of character arc, it feels like this is the most natural and realistic way for a character like this to go. However, in The Avengers, I honestly can’t tell (after one viewing) which of the paths they have taken Bruce Banner down. It seems like he has accepted his issues, but has worked on controlling it. I sort of like that. But I have no idea where they will take the character in the next Hulk film. And there will be another one. He is a stand out character in The Avengers, so there is no way they won’t try to make money off of that. 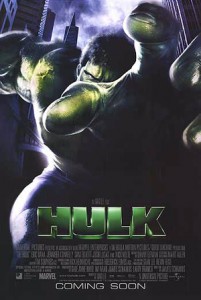 While The Incredible Hulk is technically a “reboot”, was also sort of a sequel to Ang Lee’s movie. But it is not part of the tapestry Marvel used when building up to The Avengers.

Still, I like it. I think if you are going to choose between this Hulk movie and the other, this is the one to watch. It’s a movie about abuse, and the pattern of abuse, and Bruce Banner’s struggle against his anger is part of his struggle not to continue the cycle. His father was an abuser, and when Banner hulks out, he, too, becomes an abuser.

I do get that it doesn’t appeal to everyone, and I get why. It’s not an action adventure movie. It’s an indy film with a huge FX budget.