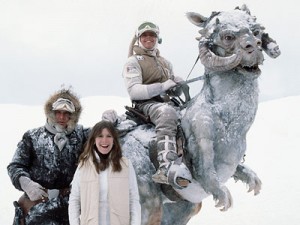 This video is pretty awesome. It’s a making of documentary from the 1980’s, and it took me back to when I would wait and hope for shows like this to come on TV.

Before VCRs, I had limited chances to see anything Star Wars related. I had Marvel comics, I had action figures, and I had TV specials that would take me behind the scenes to see how they did all those special effects (and to keep Star Wars in the public consciousness, too). I still remember the one that came out after Empire Strikes Back that had Mark Hamill co-hosting with R2-D2, showing not just how they did things for Star Wars, but also other classic movies (not this one).

This one has some interesting interviews with the people involved, and some weird mumbling by Harrison Ford. Ford’s mumbling aside, this is a great peak behind the curtain:

3 responses to “Awesome Empire Strikes Back “making of” video!”