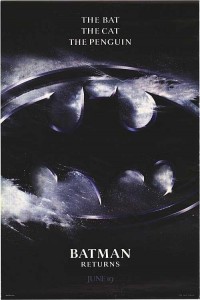 What it’s supposed to be: the follow up to the surprise blockbuster success of Tim Burton’s dark take on the Dark Knight

Thoughts: I have always loved and appreciated the audaciousness of Batman Returns. This one is far more “Tim Burton” than the first Batman, and as a result far less Batman.

It is garish and ghoulish and profane. Danny Devito’s Penguin is a site to behold, and his performance is just as disgusting as his make up; and Michelle Pfeiffer is perfect as the dual natured Catwoman.

And then there is the religious subtext. Yes, you read that correctly. This movie has some weird religious symbolism. From the Moses-like journey of Penguin when his parents push his baby stroller into a river, to the idea of the first born sons of Gotham being murdered, to the Penguin leaving Gotham and coming back thirty years later, to the way the Penguin’s penguin pallbearers carefully carry him to a weird burial at sea where the Penguin sinks downward with his arms outstretched. It’s a weird mixture of Old Testament and New Testament symbols, wrapped up into a perversion of a story.

The Christmas setting becomes one more element of that.

Of course, then there is the election subplot, which has to go through some “convenient plot gymnastics” in order to have the election during the holiday season. The election is a nice call back to an Adam West plot line where Penguin ran for mayor. (And I do so wish Cobblepot had been a mafia influence candidate for mayor in the Nolan-verse, but that was never to be. Penguin DOES get a Nolan-verse-esque treatment in the Batman: Earth One graphic novel, though! See our Amazon links below!)

The most awesome thing that can be said, though, is that this isn’t even one of the worst Batman movies!

It is bizarre. It is audacious. It is crazy. It is TIm Burton. It is Batman.

Dare I repeat myself from Iron Man 3?

No one else I know really does.

But this one is not necessarily nice. As much as I like it, I do not wish this movie on people who do not like it. if you haven’t seen it, I recommend it from an historical perspective on superhero movies. If you like it, sure, come back to it a few years later.

Like I said, this isn’t even the worst of the Batman movies . . .

Santa Ben’s Verdict: Nice, but not for everyone. So naughty, too.

One response to “BATMAN RETURNS — Strange Christmas Movies #5 (of 24)”