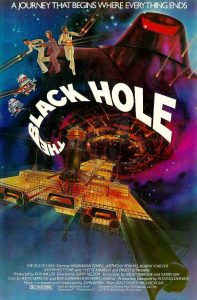 What it’s supposed to be: Disney’s answer to Star Wars.

Why it’s a Christmas movie: Saving the weakest connection to Christmas for last…

Alan Dean Foster wrote the novelization, which says outright and explicitly that it is December 24, Christmas Eve, when they find the titular black hole and the Cygnus. The movie? Well, the date isn’t mentioned. But the book was based on the script, right? And they do mentioned that the Cygnus — the massive ship that its on the edge of the black hole — lights up like a Christmas tree. And then when they go through the black hole at the end, that line gets repeated as time seems to go wonky for them. But it’s the book setting the events of the book on December 24 that places it on this list . . . about as weakly as possible, but it’s my list, my rules. (I would’ve never read the book if it weren’t for the episode we did about Black Hole a little while ago. Now, I’m so glad we did!)

Thoughts: I love this movie. It has lots of problems, and to be honest, I love it because of some of the problems it has. It’s moody, it’ creepy, it doesn’t always make sense, it’s ambitious. It’s exactly what you’d get if you took Star Wars and 2001 and mixed in a little light Shakespeare.

But, with all the talk of Dante’s Inferno as they look at the black hole and with all the creepiness of the mystery of the missing crew and the robot crew and with the ending –oh, that ending! — the idea that it takes place on Christmas adds a different dimension. The darkness of the black hole, the symbolic hell, and the “real” hell everyone finds themselves in (and then out of) are all images of why Christmas happened in the first place. That Christ came to save us from ourselves, our self-made hells, and actual hell.

Is It Naughty or Nice? As weak as the Christmas connection may be, it’s there and I’m sticking by it!

Previous: Night of the Comet