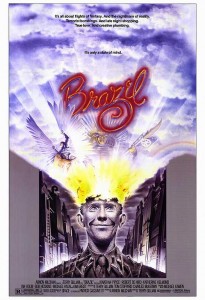 What it’s supposed to be: A dark, imaginative, surreal, and bizarre dystopian fantasy, the follow up to Monty Python’s animator Terry Gilliam’s wildly successful independent movie Time Bandits. Originally entitled 1984 ½, it tells the story of a man who lives in a world of bureaucracy and paperwork, but who escapes into a fantasy world where he can fly and the girl of his dreams must be rescued. The lines between reality and fantasy get blurred (multiple times) and in the end . . . well, you just need to see it.

Why it’s a Christmas movie: Christmas presents and decorations and Santa abound. This movie is set at Christmas, which helps draw out a number of its themes, like themes of family and relationships and the evils of commercialization.

And, yay! It’s a Christmas movie!

In one early scene, we see a little girl who is worried that Santa can’t visit them because they have no chimney. Immediately after that, an alternative method of entering the house is used by someone . . . and they ain’t Santa! Later, the main character is visited by Santa (or someone in a Santa suit) and . . . well, you just need to see it.

Apropos of the season, there is a lot of gift giving. This is a terrible, bureaucratic dystopia where paperwork reigns supreme. Sam, our protagonist, finds himself lost in a maze of dreariness and hopelessness, longing for something more in life. Longing for meaningful human relationships. Longing for love. The world around him is concerned with appearances, though, and human relationships are purely surface level, even for family. By day, he’s a cog in the machine, an office worker drone. By night, he dreams he is a hero, seeking the woman he loves.

Day and night collide when the woman from his dreams steps into his life and . . . well, you just need to see it.

It wasn’t nice for the movie studio. They hate the ending and cut the movie down to 90 minutes to give it a happy ending. This is called the “love conquers all” cut, and it makes a very interesting study in how a few changes can completely reverse the intended meaning of work of art! Fortunately, Gilliam fought the studio and gave critics a look at the original cut, and a very public dispute between Gilliam and the studio resulted. It’s a mazing anyone was willing to work with him again, but he has made a number of films, and more than one of those movies is also in my top ten of all time.

There is a book called “The Battle of Brazil” that details the story of how the movie was made and unmade and all the behind the scene CRAZY that went on. It is a fascinating read.

Previous: Lady and the Tramp