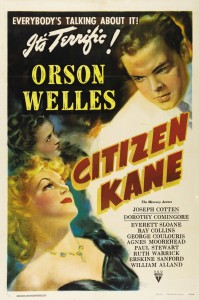 What it’s supposed to be: One of the Greatest Movies Ever Made. if not THE greatest. Seriously.

Why it’s a Christmas movie: In telling the life story of Charles Foster Kane, we see his childhood and how he was taken away from his home, to live a “better” life. We don’t see much of that better life. When he is taken away on a cold winter day, we see what he has left behind and then we cut to the young Kane opening a Christmas present in a well decorated, large house. This is his better life, this is the replacement for what was left behind. “Merry Christmas,” he is told by Mr. Thatcher, the man who took him away from his parents. He sneers in reply, “Merry Christmas.”

Then we jump cut forward 20 years, where an aged Thatcher continues, “And a happy new year!” Young Kane is now 25, and will inherit his family’s money.

It’s one of the many great moments, and it ties into the themes and mysteries of the movie.

Thoughts: I’m one of those people.

I believe Orson Welles was a misguided genius, whose pride and ego caused him many problems.

I believe Citizen Kane is one of the greatest movies ever made. Possibly THE best.

It is filled with energy, both on screen and behind the scenes. They made up new techniques so they could film what needed to be filmed. They told a story that was not linear, building a mystery that has a payoff at the end that has probably been ruined for you, but if it has not, nd you love good story, watch Citizen Kane when you have a chance to really sit down and get into it. The story flows powerfully, as we watch a man who perfectly embodies the verse “what does it profit a man to gain a fortune and lose his soul?”

The Christmas scene is an important moment for the story, although things happen so quick I did not realize it on first viewing. And many, many of the themes found in Kane are about the arrogance of sinful man, a cautionary tale giving us a glimpse at why, if the Christmas story is true as Christians believe, it is also something that needed to happen.

I’m going to stop talking about this now. I’ll just say, this is a great movie that is NOT just for film students and film historians. It holds up amazingly well today. But if you watch it, let me know! I’d love to talk about it with you!

Is It Naughty or Nice? No question…

Next: I have a dozen movies I didn’t write about and a half dozen movies I need to watch again to see if they fit this series . . . but I have a feeling this will be continued next December!

UPDATE: AND WE DO CONTINUE IT…JUST TWO YEARS LATER THAN I THOUGHT, HERE: Last Action Hero