You are here: Home › Christmas › CURSE OF THE CAT PEOPLE – Strange Christmas Movies Round Two (#40 of 48) 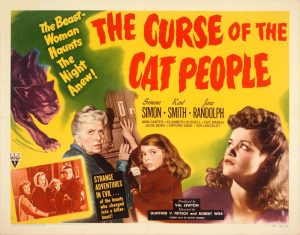 What it’s supposed to be: A sequel to the classic horror/suspense movie Cat People, directed by Robert Wise, telling the story of a child haunted by her father’s deceased first wife. It’s a psychological thriller with a child in the center.

Why it’s a Christmas movie: A significant portion of the second half os this movie takes place at Christmas time. It’s a bit complicated when it comes to plot and how it connects with Cat People, the first movie, but basically a character who died in the previous movie now appears as a ghostly friend to the daughter of her husband. At Christmas, the little girl gets and gives a present to her ghost friend, and she also gives a present to her Sunset Boulevard styled actress friend who lives in the nearby creepy house.

Thoughts: What a strange sequel. There are no “cat people” except the ghost of one, but the ghost has nothing to do with cats, really. The creative team behind the movie (producer and writer) return, along with some of the cast (the father and the ghost). It gets into some strange places with the creepy child who doesn’t fit in and who now ends up with a real imaginary friend.

The only real similarities seem to be that people don’t believe the little girl who is visited by a ghost in this movie, and in the previous movie people didn’t believe the woman who believed she was one of the Cat People. Both turn out to not be lying.

And then there’s the strange connection to the headless horseman in the climax. This thing goes all over the place.

And the old actress who believes her daughter is dead and the woman who takes care of her is a liar, a fraud, and a fake daughter. This is just another strong element, as the old woman’s real daughter hates the relationship her mother has with the child and fully plans to kill the little girl if she ever comes back. (You see, the old woman never even OPENED her daughter’s Christmas present!)

Is It Naughty or Nice? A sequel in names, but not in themes, plot, or ideas. It tries to draw parallels to the things that happened in the first movie, but all those tries fall flat. And as far as hauntings go, it doesn’t really make much sense. Was the ghost just sticking around her husband and watching his family,,,only to reveal herself to the daughter when she needs a friend? Maybe? If I cared about the characters, I might enjoy watching the male lead go from one story to another with only tenuous connections. It’s movie with three big ideas too many, a slow pace, and flat characters. I admire their ambition and creativity, and I may watch it again sometime, but ultimately…