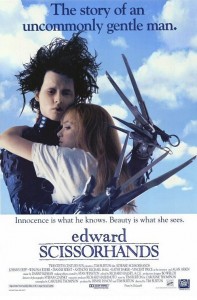 What it’s supposed to be: Tim Burton’s love letter to classic monster movies, which also happens to be a teen metaphor, featuring Johnny Depp as the title character in a story that blends gothic romance and suburban lifestyles

Why it’s a Christmas movie: The opening of the movie (from the 20th Century Fox Logo, even) takes place in a snowy winter, and Winona Ryder in old age make-up starts to tell the tale of why it snows. Her story follows the traditional cinematic three act structure, and the entire third act takes place at Christmas.

This is a lovely movie. especially compared to Batman Returns!

In fact, I had forgotten how much I liked this movie until I rewatched it recently. It perfectly captures the tone of awkward adolescence, marrying it beautifully to the tone of the Universal monsters (specifically, Creature from the Black Lagoon and Frankenstein).

Let’s just avoid discussion of the whole goth thing for now. Taking this movie as it’s offered, it’s dark, it’s melancholy, it’s sweet, and it’s wonderful crafted. It’s not perfect, but between Burton’s film sensibilities and Depp’s character acting, it feels like it could be perfect.

This is the story of a young man, Edward, who was created by a scientist (Frankenstein overtones abound!) who for some reason had to give him scissors for hands. He is found by a kind Avon lady, setting up an inverse fairy tale. The Avon lady steps into what seems like a fairy castle, but instead of entering the fairy tale, she brings Edward, the fairy tale creature, out.

And this is another movie where the Christmas season helps really set the mood of the story. Christmas is a time for family, but Edward has none. Indeed, Edward’s only family died when giving him an early Christmas present. It’s a disturbing scene, made more tragic because it’s Christmas.

In the movie, as Edward finds himself transplanted from his gothic grey life into the pastel suburbs, teen angst grows, misunderstandings abound, and love is found.

Oh, but not all is tragic. Unlike Frankenstein, where the monster is chased and killed (until the sequel), or the Creature of the Black Lagoon, which sinks to his death after his persecution (until the sequel), we get a bittersweet ending for our Edward Scissorhands and the townsfolk. And Edward Scissorhands gives back to the people who did nothing but take from him.

Yes. This is a charming fairy tale for people who love love. For people with romantic streaks that have not yet been beaten down by cynicism.

Previous: On Her Majesty’s Secret Service