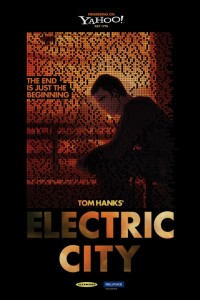 Before I watched The Booth at the End, my favorite online original series was this animated electro-punk futuristic sci-fi adventure (a variation of steampunk, without the steam). It stars Tom Hanks as one of the city’s elite assassins, and since it’s animated, he’s believable running around and performing all sorts of kung fu moves.

In a world that has long lost the resources we take for granted, electricity has become a valuable commodity. And helping protect the society is a small group of powerful women who use assassin agents to keep everyone in line. But there is a resistance who plan to use the cities own power to broadcast a radio signal. And they must be stopped.

This series is recommended not just for the story, but for the stylized artwork and the presentation within the website itself. Watching it in certain views, there is a sidebar that will give you a brief introduction to characters as they enter the story in the video. Also, I love the transitions from one location to another. It gives you a sense of the geography and the world, which is a fully realized world.

There are some moral issues that the story brings up. Do the ends justify the means? Who decides what is right for a whole society?

One weakness is the length of the episodes. I don’t mind short chapters, but there’s end credits after each chapter. The episodes, about five minutes each, might be better viewing if they were connected into a single feature length film. And even though they are separate chapters, you can almost watch them as a single unit . . . just be ready to skip over those end credits. For twenty episodes.

All the epsiodes are live, so you can watch it from beginning to end.

Recommended. Almost as much as The Booth at the End, but it has a very different tone. Note: contains some scenes of graphic violence and sensuality.

You can watch it here: Electric City

The other two blog posts in this series can be read here: Part one, The Booth at the End. Part three, H+.