You are here: Home › Commentary › Geek Bible — Romans 8:35-39: Encouragement Beyond Time and Space… 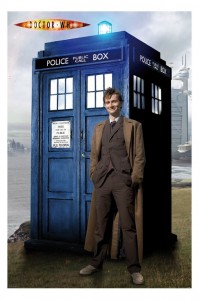 So, not even this guy can take you somewhere, or somewhen, where you’ll be separated from the love of God . . .

“Geek Bible” is a series of posts exploring passages from the Bible that have special resonance for lovers of Christ who are also lovers of sci-fi and fantasy . . .

As a young writer, I always liked to put Bible verses at the beginning of my stories. You know, to be extremely clever and look scholarly and to make sure everyone knew EXACTLY what I was trying to say with my story. I mean, all my favorite writers put quotes at the beginning of their books, but I was going one step beyond . . . I was using the BIBLE!

Anyway, one verse stuck out to me. I knew I would use that verse in a Very Important Story that was Really About Something. I placed it at the beginning of a couple times in some time traveling stories, even.

Since then, I have stopped trying to be extremely clever (I’m just not as good at it as, say, Alan Moore using Dylan lyrics in Watchmen) and now work at being extremely natural (Actually, is that even possible? To not just be natural, but to be natural in an extreme manner?) and, if I have a good quote that works I’ll use it, but it’s probably telling that I haven’t done so, I believe, in any of my published works.

But that verse, one that I learned when I studied Romans for competitive Bible quizzing (another story for another day if you’re not familiar with it, but if you ARE familiar with it you, too, still remember what you memorized back then, too, don’t you?) still sticks with me.

It is a promise. It is an encouragement. It is, in this writer’s humble (usually) opinion, one of the greatest verses to come from the Bible.

And it resounds with that part of me that looks at space travel and time travel and adventure — that inherent geek within my soul.

Who shall separate us from the love of Christ? Shall trouble or hardship or persecution or famine or nakedness or danger or sword? As it is written:

“For your sake we face death all day long;
we are considered as sheep to be slaughtered.”

No, in all these things we are more than conquerors through him who loved us. For I am convinced that neither death nor life, neither angels nor demons, neither the present nor the future, nor any powers, neither height nor depth, nor anything else in all creation, will be able to separate us from the love of God that is in Christ Jesus our Lord.

I love this verse because of the way it clearly and succinctly defines for us an unwavering love that is beyond time and space. Of course, the geek in me has always thought that Paul really missed something when he didn’t include the PAST in that list. But I doubt time travel was ever on Paul’s radar.

The counselor in my ALSO has always though that Paul missed something when he didn’t include the PAST in that list, in terms of the things that we HAVE DONE cannot separate us from God’s love — something that I know people often have trouble with. “I’ve done such terrible things, God could never love me.” The past is something that people must grapple with as they grapple with their relationship with God. However, it is telling that Paul does make this clear distinction: “nor anything else in all creation.” That pretty much covers everything, including the past, right?

Anyway, that’s not what Paul is trying to get at. What Paul is saying that no matter where you are or where you’re going, as you time travel into the future, day by day, minute by minute, second by second, you cannot — you WILL not — be separated from God’s love. Nothing can separate you from it — not that abusive past, not that abusing past; not that painful memory, not that painful relationship; not that angry boss, not that anger toward your boss; etc., etc. Nowhere you can go can separate you from it — not as you move away from a life that anchored you, not as you stay anchored in a place you should not be; not as you step forward into an uncertain future, not as the future you move toward seems to step on you; not as you run away from something that hurts you, not as you embrace something that hurts you.

And nothing, no one, no where, no when can separate you from that. Nowhere you can go, in this universe or another. As you march toward the future or look into your past. Perhaps the fan of sci-fi and fantasy could rewrite this verse as “Nothing — no evil mastermind or technological marvel — and nowhere — in space and/or time — can separate you from God’s love.”

As a sci-fi and fantasy loving geek, this verse stuck out to me.

But as a person wanting to get to know God more, this verse sticks with me.