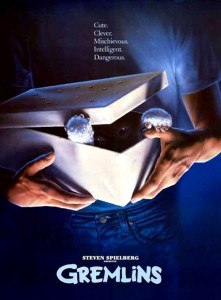 What it’s supposed to be: horror comedy about cute little creatures that become murderous monsters, sort of Alien meets the Muppets

He’s the PERFECT Christmas gift that Billy’s father was looking for.

Of course, he spawns a bunch of evil reptile-like creatures who terrorize the town and kill and maim and destroy. But he’s cute, and besides, Billy’s the one who broke the rules. Gizmo could’t help it. Gizmo’s just an animal, right? With no free will of its own beyond instinct, right? Okay, forget that in the end of the movie, Gizmo helps save the day through independent thinking and decision making. Billy broke the rules!

Thoughts: I actually think this is one of those horror movies that inadvertently makes a stronger statement about morality than was intended.

Billy is given clear rules to follow. Billy has an “original sin” moment, and as a result, the consequences snowball out of control. Sin and its consequences are probably not what the filmmakers had in mind.

No, they were more interested in making you laugh at old ladies and small animals being tortured and murdered in ridiculous ways.

And it succeeds. It’s a black comedy, as they say, and its humor comes from the evil antics of the eponymous creatures.

So one one hand, we’re rotting for the good guys (Billy and Gizmo) to right their wrong; on the other hand, we’re laughing with the bad guys as they spread their mayhem.

It all depends on your preferences and your mindset. For me, I’m not a big fan. When it came out, I was too young for my parents to allow me to see it (although I had a Gizmo toy and two Gremlins storybooks, so I knew the plot of the story). When I was old enough to see it, it was off my radar. And when I finally saw it as an adult, I already knew the story in basic broad strokes (from those story books I had as a kid), but I could appreciate the skill that went into the puppetry and filmmaking. It’s a well made film, but without the nostalgia, it didn’t capture me. The evil gags the gremlins pulled were executed well on the screen (pun intended), but not my thing. So my verdict is light, here, but I can see where people would render a “Nice” verdict.

I may not have recommended this movie, but feel free to click on the link! Ordering things from Amazon after clicking the links doesn’t add anything to your cost, but helps Strangers and Aliens and our operating costs! Thank you! Strangers and Aliens is a participant in the Amazon Services LLC Associates Program, an affiliate advertising program designed to provide a means for sites to earn advertising fees by advertising and linking to Amazon.com.

One Response to "GREMLINS — Strange Christmas Movies #3 (of 24)"