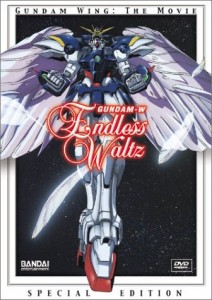 What it’s supposed to be: Another animated tale in our Strange Christmas Movie exploration, but we’re not in Disney anymore. Now we head into the world of giant mocha anime! The Gundam franchise is a huge franchise, with multiple series and movies and alternate timelines. Endless Waltz is a series of three OVAs (original video animations) that were also edited into a single theatrical presentation. The series focuses on giant humanoid mechanical suits (Gundam) that are used to fight the world’s battles.

Why it’s a Christmas movie: The story opens on Christmas Eve, in an artfully rendered quiet presentation of a final battle in a war (which was detailed in a previous TV series). One year later, on the anniversary of the war’s end, earth is united with the colonies they had warred against before. As most of humanity celebrates Christmas and remembers the war, two other things are happening. First, the Gundam suits are being launched into the sun, because war has over; second, one of the colonies is rising up to take over the united earth colonies. It seems there can be no peace on earth…

Thoughts: My connection with the Gundam franchise is spotty. I’ve seen some episodes of somethings here and there, and I’ve read the Mobile Suit Gundam trilogy of novels from the 80s. And to be completely honest, I probably would have never watched any Gundam at all if it weren’t for Endless Waltz showing up in my research for a different anime and the realization that it was, indeed, a Strange Christmas movie. But everything on this list is something I need to have seen, so I watched this and I was very, very surprised. Sure, there were probably a number of things I missed out on having only watched a couple episodes of the TV series fifteen years ago or something.

But the thing stands alone fairly well, with a story that makes sense without knowing all the background. All that is needed is given within the story. And it’s a bit clunky, preachy, and on the nose with its themes. But I felt like it grappled with the ideas of peace and war well, considering the story is built on a revolutionary (a seven year old girl!) who rises up to make war as soon as the weapons for anyone who could stop her are being destroyed AND most of the story is, like almost every action movie, there to bring super warriors into conflict. And make no mistake, the battle scenes are cool and slick. But the theme of peace above all else is done well.

Is It Naughty or Nice? I was surprised when I started watching, but by the time I finished it was no surprise to me. It’s not for everyone, to be sure, but if you’re looking for a good anime action movie for your holidays, you found it right here.

Previous: The Adventures of Ichabod and Mister Toad