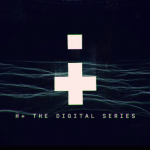 Like The Booth at the End, H+ has an interesting premise, although it comes in on the sci-fi end of the speculative spectrum. It is more like Electric City in form, though. Instead of having episodes, it consists of short, four to seven minute chapters. Even moreso than Electric City, H+ feels like a movie chopped up into short bites for internet viewers.

That’s its biggest weakness. Watching it, there is no conclusion at the end of episodes. It’s just the end of a scene, and then you have to wait days for the next scene. When I first watched episode one and then watched episode two, I was completely confused to see new characters in a new location.

My confusion also came from the scope of the series. I expected this to be like other low budget online series I’ve seen (like The Booth at the End): a small cast in a small location. Not so. The confusion I had between episode one and two came about because episode one felt like a set up to a small, little story with big ideas.

In a world that basically has implanted almost every adult’s brain with a direct link to the internet (the implant is called H+, which refers to humans becoming something more), giving everyone a virtual smart phone in their very mind. Which is great, until someone infects the internet with a virus. Most of the population of the earth dies, and the movie bounces around like an episode of Lost between characters and time periods, before the virus event, right after it, and after the effects of the event have been felt worldwide.

I’m curious about where it is going, but I feel like I want to wait until more chapters are available before I finish it. Like good sci-fi, it presents some interesting ideas and asks some interesting questions, with the problem of constant connectivity and the extremes it could go to.

Recommended, but not as highly as either The Booth at the End or Electric City.

You can watch it here: H+ the Digital Series.

The other two blog posts in this series can be read here: Part one, The Booth at the End. Part two, Electric City.