Strangers and Aliens co-host Steve talks a bit about another of his favorite strange Christmas movies, this time (in true Steve style!) lumping a whole series of movies into one! 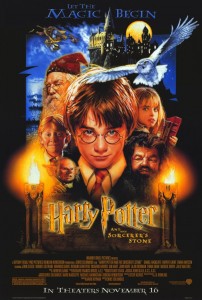 What it’s supposed to be: A coming-of-age story featuring an orphaned boy and his growing awareness of both his burgeoning magical powers and his destiny as a wizard. Author J. K. Rowling has stated that the stories are informed by her Christian faith, and so some elements of Christianity come into play throughout the series, although many Christians object to the elements of “magic” and  “witchcraft”.

Why it’s a Christmas movie: The stories are tied to school-year events, and something is always happening during the Christmas holidays; receiving gifts, investigating mysteries, being attacked by things, etc. While these types of things happen at times other than Christmas, it is pretty unique to the genre that the characters celebrate (even in a secular sense) Christmas.

Thoughts: I like fairy tales. I like good old fantasy. It’s hard to find any of the good stuff being produced nowadays, and even when you do find some, it’s usually a poem, or a short story, or maybe a story that you can shoehorn into the ‘Fantasy’ file…but nothing EPIC. Except this. Old-school fantasy woven into the present (well, maybe the not-too-distant past – no cell phones or computers at Hogwarts!), and coming from an authoress writing from a Christian perspective. But its not put out by a Christian publisher or overtly Christian movie producers, so it isn’t jammed into the Christian mold that so many viewers lament. If only Christian publishers would recognize authors who have “done their homework” and who have epic visions, not just one novel with an idea for a sequel that can be stretched over two (or, worse yet, as many as six) books. Oh, yeah, and a cinematic option that can accurately convey that vision.

Is It Naughty or Nice? It’s nice. At a time when lots of places opt for the “holidays” instead of “Christmas”, we are reminded of the core that the stories have. No celebration of Samhain, no Stonehenge revels, no seances; but Christmas is always there.