Today, Strangers and Aliens co-host Steve MacDonald gives us one of his favorite “strange Christmas movies”! 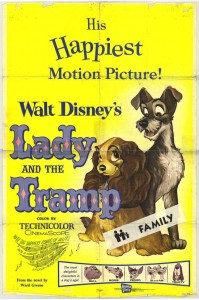 What it’s supposed to be: An adaptation of Ward Greene’s short story “Happy Dan, the Whistling Dog”, which he re-wrote as a novelization of the film (but published two years BEFORE the film’s release, so as to be familiar to viewers…uh, hadn’t anyone heard of SPOILERS in the 1950s?), Lady and the Tramp follows the upper-class Lady as she falls through the cracks of human and canine society, meeting and falling in love with the stray Tramp while trying to become reunited with her owners.

Why it’s a Christmas movie: Christmas 1909 and 1910 frame this Disney masterpiece (and I don’t use the term lightly…this one was one of Walt’s favorites, and featured some ground-breaking production – it was the first Disney feature filmed in Cinemascope). Technically, the main character IS a Christmas gift – albeit a living one.

More of a traditionalist, are you? Well, the opening sequence features Peggy Lee singing” Peace on Earth (Silent Night)”, referencing “…mother and Child; holy Infant…Spirit of love and Child of peace …” How many other Disney movies refer directly to Christ?

Why it’s a Christmas movie: Frodo and the rest of the “fellowship” leave Rivendale on December 25!

Thoughts: I grew up in what is refered to as the Dark Ages of Disney movies. Dr. Jayce thinks that WAS the Dark Ages, but the two differ in a few important ways:

1.) The real Dark Ages stretched over 800 years; Disney’s was from the mid-60s through the late-80s, and featured such cinemasterpieces as Candleshoe (with Jodie Foster, Helen Hayes and David Niven…”Laced with lareny…loaded with laughter!”), Now You See Him, Now You Don’t (with Kurt Russell in the second film in the oft-lauded “Dexter Riley trilogy”), and the perennial Easter classic No Deposit, No Return (did you really think that I’d forget this classic in the Don Knotts oeuvre?)

2.) Slightly fewer lives were destroyed in the Disney Dark Ages.

So, to my point, I didn’t see a lot of Disney animation in the theater, and VCRs were still in the far-flung future (at least on our budget they were). I first saw Lady and the Tramp a few years ago while looking for something to pacify the kids. After torturing my daughter by singing the title to the tune of Beauty and the Beast, I was pleasantly surprised by what Disney had to offer us.

Is It Naughty or Nice? It’s nice. There are some ethnic stereotypes (not mean-spirited, just a product of its time) and some bad guys (including a vicious-sounding but largely off-camera dogfight), but the themes of belonging and possession are explored in-depth (outside of a spiritual sense, more’s the pity…) to resonate with kids of all ages.