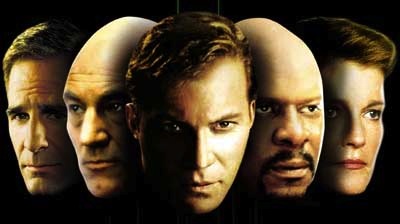 It’s an age-old question. Well, maybe not “age-old”. But it’s been a question since at least 1987, when Star Trek spawned a sequel TV series. Who is the best Star Trek captain?

Usually, the question centers around the first two: who is better, Kirk or Picard? Dr. Jayce and Ben haven’t come to blows about the answer to that question (yet) but they’ve had the discussion. Many times.

For our poll, I tried to take it in a different direction, though. Which captain would you prefer to serve under, if you were a member of the crew? Kirk, the legendary explorer? Archer, the “first” starship captain? Sisko, the frontier sheriff? Janeway, the survivor? Picard, the wise leader?

This poll is about leadership style and personality. Think about each of these officers in their prime, during the most iconic moments of their career. It’s like a super geeky version of the Rorschach test — it says a lot about you, I guess. We also ask that you post a comment below — let us know why you made your vote! And let us know why you did not vote for some of these captains.

Your favorite captain wasn’t included, you say? Well, if you have another, go ahead and tell us about it below. To make it easier, I went with the primary captain of each series. I thought about including Spock, who captained the Enterprise briefly, and then I thought about Sulu and the Excelsior, and then I realized this could go on forever . . . but if you have a favorite you want to let us know about, that’s what the comment section below is there for!

I know who I will vote for, but I think I’m going to wait just a little bit before I do. My answer might surprise you, Dr. Jayce. Or it may not.