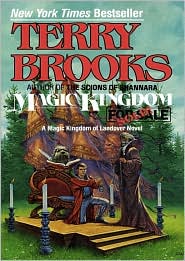 According to Variety, Terry Brooks’ non-Shanarra fantasy series is in development for the big screen.

I liked the Shanarra series, but after reading Lord of the Rings Shanarra was a world I never wanted to go back to, even with the implications that while Middle-Earth is from pre-history, Shannarra might be . . . not. I’ll leave it there.

But my friend in high school got me hooked on reading a number of different books. I think it was because of his older brother, who would discover series and pass them down. I don’t remember all the books he recommended, but this one I certainly do remember.

It’s a nice twist on the old “regular guy from our world enters another world and becomes something more”. I don’t want to give too much away, because there are some nice surprises throughout the story.

That’s the way of things, though, isn’t it. Rarely do adaptations live up to their source material. Maybe Jaws is the exception. I was not impressed with the book at all. But the movie is a classic, and rightfully so. On the other end, you have Lord of the Rings, which I think rose up to the challenge, as a movie series, to be the best movie it could possibly be.

Personally, I have reserved excitement for this news. An enjoyable and entertaining book . . . let’s hope it can become an enjoyable and entertaining movie. I believe Warner Brothers is looking for the next Harry Potter or Lord of the Rings (or John Carter), and this series has potential. I highly doubt if the first one is made, it will be successful enough to continue as a series, but if this does make it to theaters, I’ll be in line.

You can read Variety’s article here.