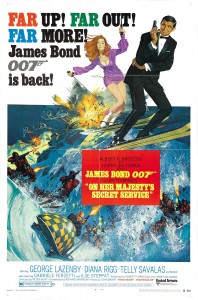 #8 — On Her Majesty’s Secret Service

What it’s supposed to be: Sean Connery’s run in the James Bond series had come to an end, and SOMEONE had to take up the unenviable task of following him — that someone being George Lazenby, in this all new, all different James Bond adventure! (Sort of.)

Why it’s a Christmas movie: Not only does part of this movie take place during the Christmas season, it also is an important element in Blofeld’s evil plan, as he gives Christmas gifts to super models who are undergoing what they think is allergy treatment but in reality is programming their brains with post-hypnotic suggestions to sterilize the world’s food supply, the gift being a makeup mirror that is actually a transmitter that will allow them to continue receiving hypnotic orders when they go home, and perfume bottles that will cause the sterilization of the world’s food supply because, well, because James Bond Bad Guy.

Thoughts: George Lazenby gets a bad rap, man. He had to follow Sean Connery, the man who not only became James Bond for the WORLD, but also influenced the Bond legend so mud that Ian Flemming, the creator, changed the character to give Bond a Scottish heritage.

But this is one of my favorite Bond movies. Perhaps even my favorite. Depends on the day. But it is always toward the top of my list.

And there are James Bond quips, like after Bond knocks out a guard, he gives his enemy a menacing “Merry Christmas” (no “Happy Holidays” here!) and then a cheerful “Maybe you should have been gift wrapped!”

And of course, there are the Bond women. Notably, Diana Rigg, who is, depending on your generation, Emma Peel from The Avengers or Lady Holiday from The Great Muppet Caper. This is Tracy Draco: Bond’s one true love, something else that is a bit different. Bond actually has an emotional attachment to this Bond girl! In later movies, when ever there is reference made to the woman he loved, this is who they are referring to.

The soundtrack is easily one of the best, with John Barry outdoing himself.

This Bond movie is more gritty and brutal than previous outings, with fist fights taking quick cuts and employing rough rough tactics and sound effects. And there are some gruesome and/or terrifying deaths.

But a Christmas movie? Yes! I mean, Christmas is an important part of Blofeld’s plan! His evil villain lair has decorations! And then there are the gifts I mentioned above for the crazy plan that makes little to no sense except that, you know, James Bond!

The evil plot, then, becomes a Christmas irony, when we find out he plans to use the poor, beautiful allergy victims to hold the world ransom by becoming sleeper agents who, at any time, could release some sort of Evil Bond Villain technology to sterilize things like cows and crops and destroy our sources of food!

And then, Bond and Tracy take refuge in a storm while being chased by the bad guys . . . in a barn! A stable, complete with horses! Coincidence? Can’t be. The film makers knew exactly what they were doing.

Oh, and it also introduces a brand new Christmas carol to the world. Really, you have to hear it to believe it:

Like I said before, I feel like this is a good James Bond movie. It is paced like a movie from 1969, so there are some slow moments if you are used to modern action movies. But it is a strong Bond outing and I think would be something that people who are not fans of James Bond could enjoy, too.

Unfortunately, Goerge Lazenby is not known as “that guy in a pretty good and surpassingly emotional Bond movie” . . . he’s known as “that guy who wasn’t as good as Sean Connery.” As much as I love Connery, though, I enjoy this movie more than most of the Connery titles.

Previous: The Chronicles of Narnia: The Lion, the Witch, and the Wardrobe