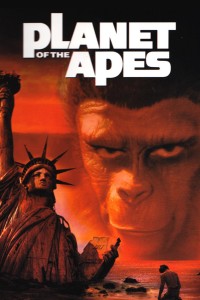 Planet of the Apes is about an astronaut crew who crash-land on a strange planet in the distant future. At first the planet seems uninhabited, but soon the humans discover a civilization where apes are the dominate species, while humans are nothing but animal like servants.

Worst part: The worst part is the makeup, but that’s only from a modern perspective looking back. At the time it was very believable (groundbreaking for that era), but with the apes mouth’s barely being able to move it is a bit distracting to a modern viewer…especially with all of the technology we have today. However, this movie is a classic!