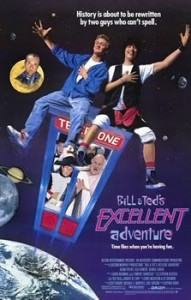 “Ted” Theodore Logan & Bill S. Preston, Esquire are two metal headed slackers who end up time travelling, meeting some of history’s most famous individuals, and give one of the best school reports of all time. In the process, they shape the entire future for the better and become the “Great Ones”.

Best part: The school report. Perhaps, it’s only because I have spent the better part of my life in one form of classroom or another, but after all of the adventures to see two underdogs make good is very satisfying.

Worst part: Keanu Reeves. Oh, don’t get me wrong, he is excellent in the movie. In fact, his character is quite endearing, but this character likely typed cast him for the majority of his career. I actually like Keanu a great deal, but many others tease him for his lack of acting ability. Keanu has joined my personal “secret” list (along with Kevin Costner)…of actors I really enjoy more so than most.

Wait I take that back. The worst part of this movie was its sequel….not even worth mentioning.