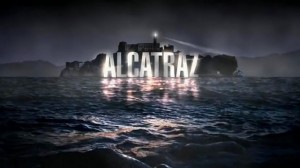 Last night, the Fox network tried to fill the hole left in so many people’s lives after Lost disappeared from the airwaves with Alcatraz.

Say what you will about Lost’s finale, the the show defined “appointment television” in a television environment that had become increasingly difficult to grow an audience. People liked it. And nothing has replaced it.

To be honest, I don’t believe anything CAN replace it. Between networks and advertisers losing money and viewers to time delayed viewing and 500 choices of digital channels to the bed economy . . . the deck is stacked against any show, no matter how good, to find an audience, keep that audience, and grow the audience AND make a profit. So smaller budget shows are important. Shows that you can just watch one episode of are important. So long involved sci-fi high-concept shows with many special effects are not what networks are looking for.

But, every once in a while, networks do take chances. Chances like Alcatraz.

Comparisons to Lost are inevitable. Just look at the title card above. Obviously, they want you think of Lost. But does it live up to the legacy? I’m optimistic. I was optimistic before I saw the first episode, and not after seeing the first episode I’m even more so . . .

1. The premise. J.J. Abrams is involved. He helped create and guide Lost at first, and he’s producing Alcatraz. I don’t know how much involvement he actually has, but he’s almost got a golden touch. Super 8, Star Trek, Lost, and Fringe are all sci-fi titles Abrams has been behind. I’ve enjoyed them all. Alactraz is a sci-fi show as well — with a simple and intriguing premise. Forty years ago, a bunch of people disappeared from Alcatraz and they are now committing crimes in the present, without showing any signs of age.

2. Speaking of Lost and Fringe, Alcatraz seems to be the answer to “What if they mated?” That’s not a bad thing. It’s a big sci-fi mystery being investigated by a pretty blonde cop.

3. The island. Lost had an island, Alcatraz has an island. Of course, in this case, Alcatraz is an island. I visited Alcatraz as a kid and I still find the thought of that place intriguing and mysterious. Choosing a location that is a part of our cultural consciousness was a smart move. Unlike the unknown island from Lost, Alcatraz is a “brand” that people are familiar with.

4. Jorge Garcia. Who doesn’t love Hurley? It was smart to put him in the middle of this mystery. He’s the guy you wanted to hang out with in Lost. And he’s just as lovable here, if smarter. Already in this first episode, he’s shown a nice range of emotion and character development. The rest of the cast is amazing, I have to add. Especially Sam Neill. I’ve always liked him. And from the beginning of Alcatraz, he does some things that, well, let’s just say it will be fun to see his character unfold over time.

5. Flashbacks. So far, in hour one and hour two we had our team of investigators investigating two different former Alcatraz inmates. I’m hoping that doesn’t mean each episode is going to be a “catch the convict of the week”, although it easily could. And it might not be a bad thing. These first two characters were unique (one of them was named Jack . . . and I hope that he’s going to be a part of the show in the future) and we are given flashbacks to the island prison before everyone disappeared. This use of flashbacks obviously hearkens back to Lost, but also gives interesting insight into the characters and the mystery . . . and the last shot of the first episode really drew me in. Alcatraz absolutely has become an appointment TV for me.

6. Scope. The one thing that will keep this from being the next Lost is the scope of the show. It’s not as big and sprawling as Lost was, which makes it more manageable for viewers and the networks. However, it also loses some of its universality. It is locked in to a very specific place that exists in the real world, instead of an imaginary place that gives glimpses of many other real places. Also, the smaller cast is strong, but again not a s broad.

In the end, I did enjoy the two hour pilot episode. I’ll be tuning in again. And I’m hoping I can find some people to talk about it the way I did Lost. Because that’s what really made Lost for me — and for a lot of people. It gave us something to think about and talk about and enjoy. And that will be the test to see if Alcatraz is successful. Not in the network’s eyes or in the Neilson’s eyes or in the advertiser’s eyes . . . but in my eyes.