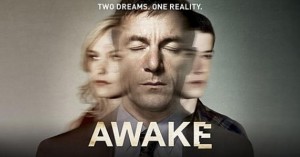 The premise: a man is in a car accident with his wife and son and finds himself straddling two worlds. In one, his son lived. In the other, his wife lived. Whenever he falls asleep in one world, he wakes up in the other. A police officer, he bounces back and forth between the worlds, dealing with situations and crimes and people in each alternate reality that somehow have ties to the other.

The pilot episode is brilliant television. It feels like a independent sci-fi film, dreamy and mysterious and heart-felt. And yet, there is also the element of the “police procedural” as well, with crimes that need to be solved in each episode. Two crimes, actually — one in each world.

I don’t know where they are going with this. I hope, unlike Journeyman (also NBC), which had a mystery thread strung through a episodic adventure, that the mystery will be solved. This is the kind of show that, if I knew was only going to be one season, I would be very, very excited.

As it is, I will be watching the next episode. There are many dramatic ways this story can go, and the personal stakes are high. Which universe is real, and which is a dream? Or is he really, truly bouncing between two universes? Or is HE the one who was lost in the accident? (I think it is very possible BOTH worlds are dreams, not from anything I saw in the episode, but just because that would be an unexpected way to go with the story that would still make sense.)

And from my parenthetical above, you can see this fits one criteria of “things Strangers and Aliens like”: it is sci-fi that causes discussion. Discusion about grief. About loss. About holding on to something dear. About dealing with difficult situations. About accepting things we have no control over.

I said the pilot episode feels like an independent film. Part of that comes from this: while obviously, they are setting up a situation that can carry a season of episode, this first episode has resolution. If this had been the only episode of the series, I would have been happy. (Granted, if you have seen the extended preview, you might have been spoiled a bit.) The resolution is an emotional one, but it makes the first episode feel like it has a beginning, middle, and end. But it’s an ending that, fortunately, makes us want more, too.

This review is based on the full episode preview from NBC.com