You are here: Home › Reviews › REVIEW: Safety Not Guaranteed 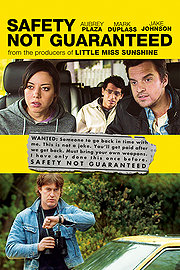 I want to spoil this movie so much.

Not out of spite, out of love. For this movie.

Maybe I will, some time. But for now, I’ll stick to a spoiler free review.

Again, out of love. For you, dear reader.

If you like time travel or have ever thought about time travel, this movie is for you. Like Robot and Frank, it is a sci-fi movie that tries to ask some interesting questions while telling a quiet, quirky story about three big city reporters from a glossy magazine who want to do a story about a man who put an ad in a newspaper:

That’s pretty much all you need to know. They head to a small town and relationships are formed and motives are revealed and plot twists come.

Is it a good sci-fi time travel movie? Yes. The idea of time travel gets talked about by the characters, obviously, as they try to figure out if the person who placed the ad did it as a joke or if he really believes it can happen.

Is it a good movie? I liked it. It is subtle and cleanly edited, with plot twists as I said about, but it all hinges on the characters and their emotions. Fortunately, the cast is good enough to hang that kind of a movie on.

All this to say I recommend it. It is the kind of movie I just want to talk about and mull over with people.

But only people who have seen it. So, not in this review. Because I’m not spoiling it.

It is rated R for language and some sexual references.

One Response to "REVIEW: Safety Not Guaranteed"