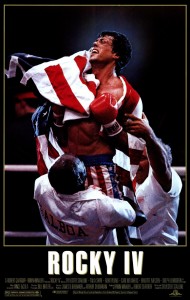 What it’s supposed to be: The fourth part of the Rocky franchise. And some would say everything that’s wrong with sequels.

Why it’s a Christmas movie: It’s the fight of the century! Rocky/America vs. Drago/Russia! And it’s on Christmas day! Happy birthday, Jesus! We’re going pound each other into hamburger!

Thoughts: Even as a kid, I recognized that this movie was over the top. (Even more over the top than, well, Stallone’s movie “Over the Top”.) This was a movie about the much smaller American boxer Rocky, who trains out in the Russian wilderness with logs and rocks and stuff vs. the enormous Drago, played by Dolph Lundgren, who trains with steroids and computers and sterile machines.

Obviously, we know the outcome. But we don’t care. We want to go there with him. There’s clever dialogue, weird birthday presents (that robot programmed with a woman’s voice?), and “yay, America” jingoism (which I recognized as a kid, just didn’t know the name). Like all Rocky movies, this is sports storytelling at its finest: create an underdog situation with an invincible opponent and unbeatable odds and watch our plucky protagonist rise above it.

Oh, I love it. I shouldn’t. It’s manipulative and cliche. But we’ve spent three movies with Rocky already. We like the guy. The movie doesn’t have to be good, we just like him. (Well, Rocky V may prove me wrong.)

So Rocky’s son is at home in America, watching his dad get pummeled for Christmas. Rocky’s wife, who has NEVER liked the boxing, is forced to sit in an arena filled with Russians cheering for her husband to die. The music rises perfectly, guiding along our adrenaline. Rocky starts to lose . . . then to win . . . then to lose. We know how it will end . ..  is there possibly a twist that we are not expected?

How about when the Russians’ jeers against Rocky turn into cheers FOR the American hero for the people! This isn’t a boxing match! This is the final battle in the Cold War! East vs. West! AMERICAN vs. RUSSIAN!

SPOILER: When Rocky DOES win, he gives the best Christmas speech since Linus told Charlie Brown the true meaning of Christmas! (With an American flag in place of Linus’ security blanket.)

I came here tonight, I didn’t know what to expect. I seen a lot of people hate me and I didn’t know what to feel about that so I guess they didn’t like much nothin’ either. During this fight, I’ve seen a lot of changing, in the way you feel about me, and in the way I feel about you. In here, there were two guys killing each other, but I guess that’s better than twenty million. I guess what I’m trying to say, is that if I can change, and you can change, everybody can change!

I just want to say one thing to my kid who should be home sleeping! Merry Christmas kid! I love you!

Rocky’s son mouths “I love you” back to his TV. Cue awesome 80s rock music.

Yes, this is the true meaning of Christmas. The Cold War is over. Truly, this battle has brought peace on earth . . .

Is It Naughty or Nice? How can I possibly rule ANY other way? Some could argue this doesn’t fit into the “Strangers and Aliens sci-fi/fantasy milieu.” They are, of course, wrong. This is a superhero fantasy of epic proportions!