You are here: Home › Reviews › SCI-FI FOR KIDS: Wall*E

When I was a kid, my imagination was dazzled by Superman and Star Wars on the silver screen and Superfriends and Battle of the Planets on the small screen (among many, many other things), not to mention various comic books like Superman and X-Men and kids books like Narnia and The Littles and . . . well, you get the idea. Some of it was good. Some of it was not. But they engaged my imagination, and pushed me to become what I am today: a storyteller.

This was pre-internet. Pre-cable (and even when cable was available, we never could afford it). Pre-immersive, ultra-realistic video games (although, it’s amazing that we managed to waste just as much time on video games back when they were just moving blocks of color and not fully rendered 3D environments). Pre-absolute-media-saturation. I’ve found myself wondering what is out there inspiring kids to be creators and storytellers and filmmakers and scientists and thinkers.

That’s what’s inspired this “series”. On and off, as I discover works of sci-fi and fantasy in different mediums that engage both my kids and me, I’ll pass on that recommendation. 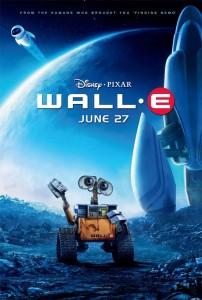 There are flaws. Some people might feel the whole environmental thing is over the top. Truth is, it IS over the top. It’s supposed to be. It;s that kind of sci-fi movie. “What if . . . the whole world was rendered uninhabitable by our waste?” It’s part of a tradition of sci-fi movies that deal with these kind of questions . . . like Soylant Green or Planet of the Apes or Silent Running or Star Trek IV: The Voyage Home. All of these movies take current fears and then take them to a horrible conclusion, whether it is nuclear war or overpopulation or food shortages or animal extinction or the destruction of the environment. And while I know the environment is a hot topic, and line have been drawn politically, the movie itself is less commentary on environment and more commentary on a culture of consuming.

Another flaw: halfway through the movie, it stops being Wall*E’s story and becomes some new characters’ stories. This is okay, because it’s still fun and interesting. i just wish Wall*E had been a more personal part of the climax. 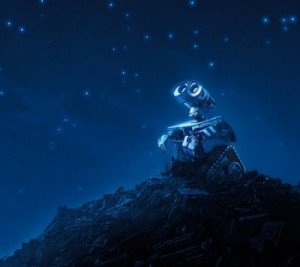 But this is PIXAR, and that means heartfelt storytelling, technical excellence, engaging characters, and lots of fun. Half of the movie is essential a “silent picture”, featuring two speechless robot characters. Body language, music, and a select few words convey more in this animated movie than you see in a lot of big budget movies with human actors. When it becomes a “talkie”, moving into a new location and introducing new characters, again the script, animation, and acting convey plot and character in a much stronger way than so many other movies.

Spiritually, the second half of the movie actually cut a little close to home. (Mild spoiler for a reveal in the middle of the film — don’t read this paragraph if you don’t want that sort of thing.) It’s a poignant portrayal of our current state of being (at least, here in America) with doughy, overweight, lazy people who have their every need catered to by machines. All they do is exist to consume — consume food and consume entertainment. Their lives are easy and comfortable, but lonely and meaningless. It’s great fodder for conversation with your kids, and also a visual metaphor that sticks in your mind.

And, being sci-fi, as I said before this has some big ideas. There is the earth becoming uninhabitable because of all the garbage created by our culture. This idea has a spiritual component as well, because weren’t we made stewards of this planet? Aren’t we supposed to care for it? Isn’t it, as something created by God, something worth taking care of? Younger generations won’t even blink at this message, which is, on a grand sci-fi scale, basically a reminder to “reduce, reuse, recycle”. There is also a generational starship, a concept I personally love. Finally, the movie itself doesn’t ask questions outright about robots having souls (like, say, having Commander Data stand trial to see if he’s a “person” or not), but indirectly it has robots developing feel ins for each other far beyond their original programming. 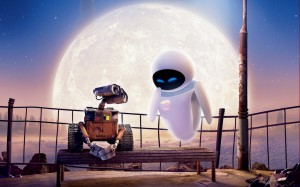 Is it possible for two robots in a cartoon to have a more believable romance than human actors? Yes. Yes it is.

I can’t think of a PIXAR movie I haven’t liked. There are a few I haven’t SEEN (both Cars movies and Ratatouille), but not one that I haven’t liked. And perhaps Wall*E holds a soft spot for me because it gets into the sci-fi ideas that I enjoy. But it is genuinely funny and charming and sweet and exciting. All the best things I used to love, and still do, about sci-fi. That’s why I recommend this movie as good sci-fi for kids . . .