You are here: Home › Commentary › SCI-FI/FANTASY FOR KIDS: The Radio Adventures of Dr. Floyd 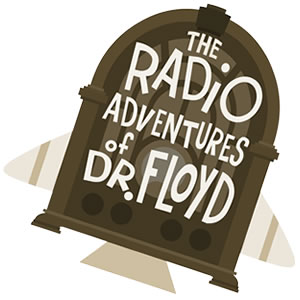 I discovered The Radio Adventures of Doctor Floyd on, of all places, the radio. I heard a couple episodes on my local public radio station, as part of a one hour block of short comedy sketches. They’d play a Bob Newhart sketch and a Bill Cosby recording and some other things that came from who knows where.

Two weeks in a row, I managed to hear an episode, and then the comedy block thing got canceled or moved or whatever. I never found it again . . . until I happened across it in a search for sci-fi radio drams on iTunes.

As I listened to it, I realized I had heard it before, but I also realized it was pretty cool. It’s about a scientist, Dr. Floyd, who is chasing his archenemy, Dr. Steve, across time and space. Written in a tone reminiscent of Rocky and Bullwinkle, it’s a snappy and witty jaunt through history, and while it’s fun, you might even learn something!

The series ran weekly for a long while, and there are a large number of episodes. But, this is the one problem: they have stopped production. Fortunately, the series actually has an ending (a perfect ending, in my opinion — I love circular storytelling, and this time travel story has a perfectly appropriate circular story arc).

My whole family loves it. Well, my kids and I love it. My wife tolerates it. It’s just funny enough for her to not get annoyed.

You can download all the episode in one chunk, or you can subscribe in iTunes, where they are releasing the episodes one at a time all over again. That’s how we’re doing it . . . but I just may lose patience and go ahead and download them all.

One Response to "SCI-FI/FANTASY FOR KIDS: The Radio Adventures of Dr. Floyd"