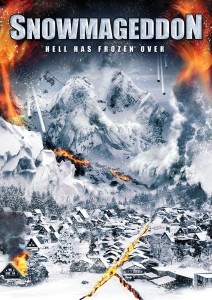 What it’s supposed to be: A low budget made for TV — SyFy channel, no less — disaster movie about a killer storm that wreaks havoc on a small Alaskan town and the surrounded wilderness. It’s actually not the storm that creates the havoc, it’s some sort of magical snow globe. Helicopters are shot out of the sky, snowboarders are stranded and wounded, power lines trap people, kids run away, and people get split up. It’s everything you’d expect from a direct-to-SyFy movie based on a ripped-from-the-headlines portmanteau.

Why it’s a Christmas movie: It’s not just the date, although it happens on Christmas Eve. Everything is set in motion when a family has a Christmas gift placed on their front porch by a mysterious person. The Christmas gift is a snow globe. A steampunk snow globe with magical powers. Also, the mom of the family is a helicopter santa, bringing presents to people the next town over, but giving the movie an excuse to send people out into the mountains for when the storm comes. But once more, this is about family! Family trying to come together and rescue each other from horrible, awful, no good, very bad special effects of a storm that shoots ice bullets.

Thoughts: Oh man. This movie. I like bad movies. I do. But I’m not a fan of the Sharknado brand of bad. But this one takes itself seriously, as if they actors weren’t told what kind of movie they were in. And that actually helps it.

But it’s still a movie about a magic snow globe that causes earthquakes, storms, and avalanches.

An EARNEST movie about a magic snow globe that causes earthquakes, storms, and avalanches.

But a movie about a magic snow globe that causes earthquakes, storms, and avalanches, none-the-less.

And then it turns into Lord of the Rings, as a board game gives them the solution to stopping the snow globe. Where does the snow globe come from? The world may never know. Maybe in the sequel. (Man, I hope not.) The closest they get is “Maybe it ended up where it needed to be” or something like that, meaning, when asked to explain, “Every story needs a hero.” (?) (This movie really wants to be Lord of the Rings at the end. I mean it really, really does.

And they don’t ever get into the idea that possibly, the are IN a snow globe, because they are cut off from the rest of the world, but we only know from a dropped line.

But it’s not terrible. The cast is likable, featuring a number of actors I’m familiar with, like Michael Hogan from Battlestar Galactica and Lorne cardinal from Corner Gas and Magda Apanowicz from Caprica and Laura harris from Defying Gravity — plus some other people who look familiar.

Is It Naughty or Nice? It really should be “naughty”. Really, truly. This was not good. Dialogue is okay, acting is decent, idea is wacky, execution is cliche, FX are not good. But no one sets out to make a bad movie. And it’s possible that every movie has an audience. So I’m going to pass my verdict giving this movie a pass. This just might even make it into regular Christmas rotation.

One of the characters sums it up nicely: “Wait a minute. That’s not crazy.” He’s talking about an idea they have in the movie to destroy the snow globe, but he doesn’t say, “That’s a good idea.” Just, “That’s not crazy.” I agree. I’m not damning with faint praise when I say this movie was not terrible. Terrible is what you’d expect. But it’s not what we get.

(But it really shouldn’t be…)