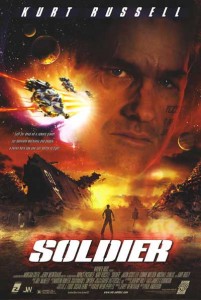 at it’s supposed to be: The story of a soldier who, trained since birth for that one purpose, is found to be obsolete when new, better soldiers are manufactured. Taking residence with a peaceful colony, he must come to terms with his nature and his past.

Why it’s a Christmas movie: One major turning point in the movie is the result of a Christmas party. Finding himself with peace loving people who take him in on the garbage planet he was dumped on, Todd (the titular Soldier) finds himself disconnected from the others. A post-tramatic episode in the midst of the noise and celebration kicks off a series of events that cause the people of the colony to push him away. He is forced out of the colony, walking away from them with the decorative lights symbolizing the unity of the group still lit in the background, visible through the gates.

Bad guys (the new breed of soldiers) promptly come and cause trouble for the colony, allowing Todd to do what he does best: kill.

And they all live happily ever after.

Thoughts: This movie was a LOT better than I remembered. There is some symbolism that gets a bit heavy handed (a snake enters literal garden, where the love interest is planting saplings and teaching Todd to grow life, not take it . . . then the snake symbol is shifted for a lesson in defending oneself with violence) and Kurt Russell’s nearly wordless character (Todd) falls a bit flat at times.

But for an action movie, it’s got some emotional beats and some nice sci-fi ideas.

Is It Naughty or Nice? It has Gary Busey, in between when he was good actor Gary Busey and crazy acting Gary Busey.

And finally, it is maybe, sort of connected to the Alien and Blade Runner. The movie references both Alien and Blade Runner and was written by David Peoples, who wrote Blade Runner’s screenplay. Peoples actually has said he wrote it with the idea that it was set in the same universe as Blade Runner. Which would tie this movie and the Alien movies and Predator movies to Blade Runner, creating a weakly connected cinematic universe. So this possibly puts it in a DIFFERENT series I’d like to do — Strange Sequels, which would be about movies that are not technically sequels, but that have connections that MAKE them sequels.

Next: The Princess Bride