I’ve seen articles about this around the internet and I find it very, very interesting.

In anticipation of Star Wars: Episode I – The Phantom Menace being re-released in theaters next month in 3D, a burger joint in France is making the experience even MORE interactive . . . but letting you consume the light side or the dark side of the Force. In burger form.

First up, the Dark Burger:

I think the bun is supposed to have a reddish tinge to it, and I’m guessing it’s sort of hot. Maybe spicy even. But this one is based on Darth Maul. And really, you should probably cut this one in half before you eat it. Nyuck, nyuck, nyuck.

Next up, the Jedi burger: 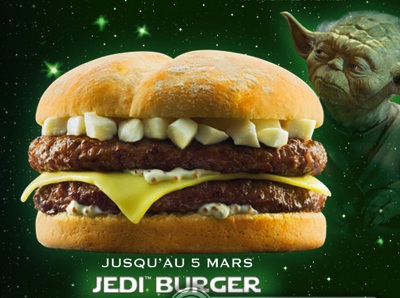 I have no idea what this burger is supposed to be. It’s got two patties. Special sauce. Cheese. And styrofoam chunks. At least the Dark Burger looks like real food. This burger looks like they said (in French, of course): “Let’s take a regular burger and put something on it that looks like the fake alien food they used to use on Star Trek: The Next Generation!” (My son just asked me, “Are those marshmallows?” He just may be right.)

But the pièce de résistance has to be the Dark Vador Burger: 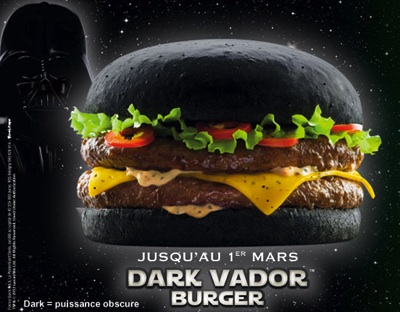 Yes, using food coloring they have colored the bun black. (My son’s reaction: “What in the world? That . . . looks . . . gross . . .”) Other than that, it looks like a regular burger. Except a bun that LOOKS like it has been burned. Charred. Hmmm. Considering Anakin’s fate in Revenge of the Sith, maybe a bun that looks burned and charred isn’t so crazy.

Well, not so crazy except, of course, that they want people to EAT it.

And I don’t think “Dark Vador” is a misspelling. I think that may be how it’s said or spelled in France.

Here’s a look at the actual ads: 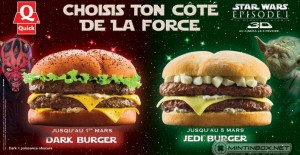 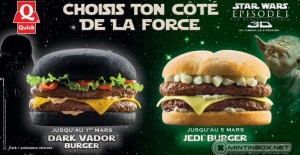 Looks like they’re doing something similar to Burger King’s Spider-Man III campaign, when you could choose good or bad by choosing Spider-Man’s normal costume or his Venom costume on a scratch off prize ticket thing. “Choisis ton cote de la force” translates to “choose your side of the force” (roughly). Interesting that they give two dark side choices and only one light side.

And now, to add to the menu, my son and I have selected the Jabba the Hutt burger: 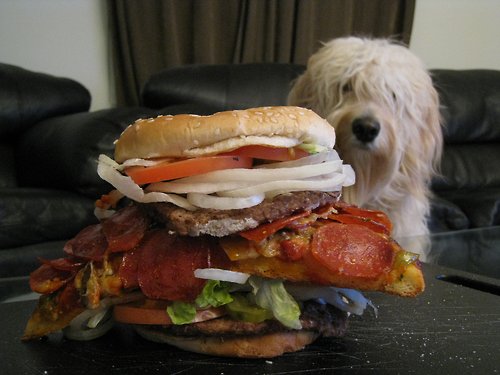 Looks like there’s some elderly Wookie in the background eyeing this thing hungrily. (Picture via funny-potato.com) And judging from one of the toppings in the middle there, looks like the Jabba the Hutt burger is delivered to your door by Pizza the Hut.