You Thought the Star Wars Holiday Special Was Bad? 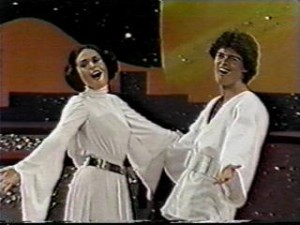 If you thought Star Wars Holiday Special was terrible . . . wait until you see this:

It has everything: dancing stormtrooper, terrible puns, Red Foxx (complaining that this year planet Sanford “has no sun” — his show Sanford and Son came back in 1980, but it was just called “Sanford”), Kris Kristoferson playing a Han Solo-ish rogue, Darth Vader escaping in the (SPOILER) (What? How? Why? How is it Chewie and Kris Kristopherson have that cardboard box rocket and Darth has . . . well, stick around to the end of the show to see . . .), jokes about the “farce”, jokes about dental hygiene. One forward thinking thing they got right? Luke and Leia are brother and sister!!!

But, really, you just need to see it to believe it:

I have to say, the designs for the female troopers were kind of cool.

I don’t know what this means. I’m sure some sort of spiritual application could be made . . . but truthfully, my brain hurts too much after watching Donnie and Marie to really put that much thought into things.

One response to “You Thought the Star Wars Holiday Special Was Bad?”